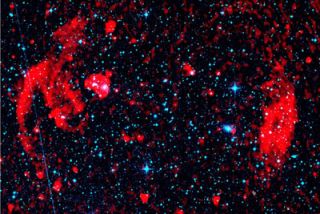 This image shows the VLA telescope radio images (in red) of enormous radio structures discovered by J. Bagchi and colleagues, superposed on the optical images (galaxies and stars), taken by the Digitized Sky Survey (in blue/gold color).
(Image: © Science.)

Aring-like formation around a distant cluster of galaxies has yielded what may be thefirst glimpse of a shockwave spawned by either a cosmic collision or interstellar gas.

Thering, made up radio signal-emitting arcs [image],surrounds a rich collection of galaxies known as Abell 3376. It appears to be atell-tale sign of the cluster’s growing pains from accreting gas ormergers on a galactic scale, a new study suggests.

“Wethink these radio [objects] are tracing out theshockwaves from large-scale structure formation,” said radio astronomerJoydeep Bagchi, a professor at Pune, India’s Inter-UniversityCentre for Astronomy and Astrophysics, who led the recent study.

Bagchiand his colleagues used the VeryLarge Array in Socorro, New Mexico to scan Abell 3376, where they found apair of immense radio arcs on the outer fringe of the cluster. The researchappears in the Nov. 3 issue of the journal Science.

Astronomershave known of such objects, previously dubbed “radio relics,” sincethe 1970s, but only recently associated their presence with shockwavesresulting from galaxycluster mergers, researchers said. Pinning down their source can helpastronomers understand the finer details of the evolution of large-scalestructures in the universe, they added.

Bagchitold SPACE.com that computermodel simulations of galaxy cluster mergers have consistently producedcosmic shockwaves, but the actual phenomenon has not been visible so clearly asseen around Abell 3376 [video].The cluster’s radio arc signals, he said, are indicative of high-energyparticles streaming outward at near the speed of light.

Thegalaxy cluster's radio arcs may also have stemmed from an accretion shockwavegenerated by colliding bits of interstellar gas as they fall under thecluster's gravitational spell. As the interstellar gas falls inward towards thecluster, it collides with the galactic group's own hot, ionized gas to formshockwaves, researchers said.

“Accretionshock waves are very interesting because they may be the origin of thestill-mysterious ultra-high energy cosmic rays…,” wrote astronomerTorsten Ensslin, of the Max Planck Institute for Astrophysics in Germany, in a Perspectivesarticle related to Bagchi’s study in Science.

Theaccretion model would also call for the presence of magnetic fields on theouter fringe of a galaxy cluster, rather than their typical haunt at itscenter, setting the stage for the formation of high-energy particles, Bagchiadded.

“Sothere’s already all the ingredients of a cosmic particleaccelerator,” Bagchi said. “That is an exciting possibility forfuture research.”

Bagchiand his colleagues focused on the radio emissions of Abell 3367, but thedevelopment of more sensitive telescopes and space-based instruments—suchas NASA’s planned Gamma-rayLarge Area Space Telescope (GLAST) to launch next year—will peerdeeper into the source of high-energy particles.

“Thisis a very exciting result and there are a lot more to come, I believe,”Bagchi said. “It’s the beginning of [understanding] something thatis still hidden beyond our vision.”