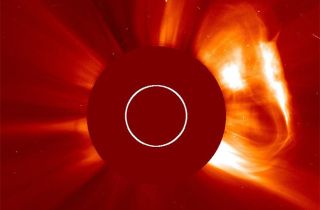 A solar storm hurtles out towards Mars in this 2011 picture from NASA. Coincidentally, it happened around the same time the Mars Curiosity rover left Earth for the Red Planet.
(Image: © NASA/ESA/SOHO)

In "The Martian," Mark Watney deals with a lot of dangerous situations — food and communications being a couple of them. But what if his camp got hit by a solar storm? How could he protect himself in that situation?

Solar eruptions can cause damage to people and spacecraft. The radiation that flows during these events can short-out sensitive electronics and give astronauts an overdose of radiation, if they're not careful.

PHOTOS: Watching the Sunsets of Mars Through Robot Eyes

We have a lot of warning systems set up at Earth to help our planet (and the satellites and astronauts in orbit) out, but Mars presents a special challenge: it's much further away. Radiation studies of the surface are only just beginning, so we don't know about long-term exposure levels. There are no people there (at least yet), but NASA and other space agencies have a fleet of spacecraft there carrying out observations to work out how best to protect them. [Surviving "The Martian": How to Not Die on Mars (Infographic)]

Simply speaking, there are two kinds of solar eruptions. Solar flares are a quick flash that travel at the speed of light, taking eight minutes to reach Earth and at least 14 minutes to get to Mars. That's not a lot of time to scramble out of the way, says Alex Young, associate director for science in the heliophysics science division at NASA Goddard Space Flight Center.

"If I was going to be (an astronaut) on Mars, I would have some sort of monitor on Mars. I would be looking at the sun on Mars," Young told Discovery News. Young suggests a future mission — much like what is portrayed in "The Martian" — would include a telescope to keep an eye on what the sun is doing.

ANALYSIS: How a Mission to Mars Could Kill You

Then, if the astronauts saw trouble coming, they would go to radiation-resistant bunkers, such as underground structures or those built with radiation shielding. Water is one possibility, and there are also researchers at the NASA Langley Research Center investigating new radiation-resistant materials, such as nylon embedded with boron and nitrogen.

Coronal mass ejections (CMEs), a second type of solar eruption, are clouds of particles that speed along quickly, taking a several hours to a few days to get to our planet. For Mars, there's 50 percent more warning, meaning it might take the fastest-moving CMEs 27 to 30 hours for the particles to get there. But they're higher-energy and longer lasting than the solar flare, which could lead to higher radiation exposure.

While humans take shelter, for spacecraft in orbit it's best to shut non-essential functions off until the storm has passed, Young says. So far the approach seems successful, as colleague Antti Pulkkinen at Goddard says no Martian spacecraft has been totally disabled by the sun, yet.

"Spacecraft anomalies ("ghost" commands, bit flips etc) do occur and some of these are possibly due to space weather," he wrote in an e-mail to Discovery.

"Why I am saying 'possibly' is that it is very difficult to say what was the definitive cause for experienced anomaly. We cannot go there and look under the hood to check what exactly was going on."