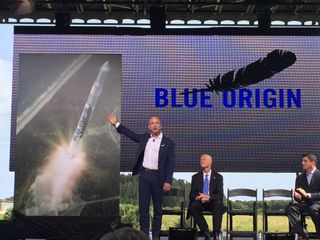 Blue Origin, which Bezos founded in 2000, will launch rockets and spacecraft from Launch Complex 36 at Cape Canaveral Air Force Station. The company will lease the launchpad and establish a "21st century production facility" to manufacture a reusable fleet of orbital vehicles. Florida Governor Rick Scott praised the venture, which he said will "invest $200 million locally and create 330 jobs."

"As a kid, I was inspired by the giant Saturn V missions that roared to life from these very shores," Bezos said during the announcement here today (Sept. 15). "Today, we're thrilled to be coming to the Sunshine State for a new era of exploration." [Watch Blue Origin Announce Its Florida Launch Plans]

Bezos made the announcement during an event close to Launch Complex 36, which saw its last launch in 2005. Speakers at the event included Governor Scott and Sen. Bill Nelson (D-Fla).

At the event, Bezos also unveiled an artist's concept image of Blue Origin's new orbital launch vehicle, which Bezos said has been nicknamed "Very Big Brother."  The new rocket will launch and land vertically to reuse its first stage.

The new Florida facility will include a rebuilt launch pad, a facility for performing acceptance tests of the new BE-4 rocket engine, and a processing facility for manufacturing, integrating and prepping vehicles for flight.

"We'll be launching from here later this decade," Bezos said of the new Florida facility. Bezos told reporters that the company received detailed proposals from five states wishing to host the new facility.

Blue Origin is one of several private companies — like SpaceX, Boeing, Virgin Galactic and XCOR Aerospace — in the race to offer commercial trips to space for passengers. Last week, Boeing opened a facility for its new Starliner space capsule, formerly known as the CST-100. NASA plans to use the Starliner capsule and SpaceX's Crew Dragon vehicle to launch U.S. astronauts starting in 2017.

The Kent, Washington-based Blue Origin is currently developing a vehicle called New Shepard that is designed to take passengers on short suborbital trips so they can experience the thrill of weightlessness and see the blackness of space without the filter of Earth's atmosphere. The company will launch only the new orbital vehicle from the Florida facility; New Shepard will continue to launch from the company's facility in West Texas.

Blue Origin launched a successful test flight of New Shepard last April. That spacecraft, like the new orbital launch vehicle, will feature a reusable rocket booster capable of vertical landings — a technology that space industry leaders have said can dramatically reduce the cost of commercial spaceflight. During the April test, the passenger segment of New Shepard successfully separated from its rocket booster, but the rocket itself was not recovered.

To power its new orbital launch vehicle, Blue Origin is developing a more powerful rocket engine known as the BE-4, which is a joint venture with launch provider United Launch Alliance (ULA). The BE-4 is slated to be ULA's engine of choice for its own new rocket, the Vulcan, which will have a reusable component. Blue Origin and ULA announced a production agreement for the BE-4 engine last week.

"You will hear us before you see us," Bezos said today. "Our American-made BE-4 engine — the power behind our orbital launch vehicle — will be acceptance-tested here. Our BE-4 engine will also help make history as it powers the first flight of United Launch Alliance's Vulcan rocket."

Cooperation between NASA and private companies has accelerated in the past year.

Last week, Boeing opened its Commercial Crew Cargo Processing Facility for the Starliner space capsule at NASA's Kennedy Space Center near the Cape Canaveral Air Force Station. That facility is located inside one of NASA's old space shuttle hangars, which Boeing has repurposed for the Starliner vehicle.

Meanwhile, commercial spaceflight company SpaceX, founded by Elon Musk, has captured its own foothold on Florida's Space Coast. The company recently signed a 20-year lease with NASA to use the agency's Apollo and shuttle-era Launch Pad 39A complex to launch its huge Falcon Heavy rocket.

SpaceX has also been testing a reusable booster for its current Falcon 9 rocket, and has made several unsuccessful attempts to land the booster stage on a drone ship this year. SpaceX hopes to attempt another landing later this year.

Bezos said he looks forward to Blue Origin becoming a part of the long legacy of spaceflight associated with the Cape Canaveral region.

"You residents of the Space Coast have enjoyed front-row seats to the future for almost 60 years. That's pretty cool," Bezos said. "Our team's passion for pioneering is a perfect fit for a community foraging new frontiers. Please keep watching."