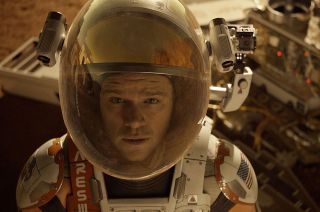 In the history of Hollywood envisioning the future of space exploration, few, if any movies have come as close to NASA's own goals at the time of their release as does "The Martian."

At a recent media event that previewed NASA's "Journey to Mars" and the Ridley Scott film opening in theaters on Oct. 2, the director of the U.S. space agency's planetary science division integrated images from the movie into his talk about NASA's real missions to the Red Planet, subtly blurring the line between reality and imagination.

"As a filmmaker, [Scott] wanted to make ["The Martian"] realistic, and I really appreciated pulling together teams of people and answering the questions that he asked," stated NASA's Jim Green while describing his interaction with the movie's director. "And the more that happened, the more I got excited about it." [Video: Matt Damon Says Making 'The Martian' Was Amazing]

"Because it does indeed look very realistic, there are a lot of realistic elements in it, and it is very much appreciated from a NASA perspective," he said.

Green and Scott came together to discuss their respective visions for the exploration of Mars at the Jet Propulsion Laboratory (JPL) in Pasadena, California, where they were joined by astronaut Drew Feustel, actor Matt Damon and Andrew Weir, whose novel "The Martian" was the basis for the film.

"It never occurred to me that it would have mainstream appeal," Weir said of his 2011 book, which he initially self-published online. "I just thought it would be this complete niche, that very few people would be interested in."

"My favorite thing," he added, "is when I get fan mail that begins 'I don't normally read science fiction, but...'"

Emphasis on the science

As the movie trailers have already revealed, Damon plays NASA astronaut Mark Watney, who finds himself stranded on Mars in the near future. His only hope for survival is to "science the shit out of this planet," as Damon's character memorably states in both the book and the film.

Weir went to some lengths to make sure that the science he presented was correct, going so far as first calculating the trajectory that his Ares III astronaut crew would take to reach Mars, such that where and when they landed was scientifically accurate. [See Photos from 'The Martian']

As such, Scott was keen to get the science as correct as possible, too.

What he found though was that it was more of a challenge to make a movie where the engineering was grounded in reality than one where the science fiction could be more futuristic. For example, to get around the fact that Mars has less gravitational pull than on Earth, Scott rationalized how his astronauts walked on the surface.

"It is a fairly chunky suit," he explained. "Fairly heavy, so the mathematics roughly works out at, more or less, just under normal movement."

"It's a situation where you just have to suggest it, I think" Damon added. "We're not at a point where we can do 40 percent gravity. We can do weightlessness, we can get on wires and do that space stuff, or you can do the 'Vomit Comet' [parabolic flights]."

"But it's not what these real guys can do – I'm sitting next to one," he said, pointing at Feustel to his right.

"These things are very real for us," said the veteran of two spaceflights, "these visions of exploration, and this brings them to life. Thank you for making us look good."

"We are not as smart and cool as we look up there on the screen," Feustel remarked.

As it turns out, being cool is something the space agency, and its astronauts, find can be difficult.

"The challenge we have at NASA — even as astronauts — part of our role is to go out and educate the public, talk to kids and inspire people. But unfortunately we do that with boring things that we do really well," Feustel said.

"I mean, we have been exploring space with humans for a long, long time — more than fifty years, and the challenge we have is, we do it well, we do it right, we try not to make mistakes, and we keep the drama out of it," he stated. "I watched this movie, I read this book, and it's just amazing — I was really captivated. But as an astronaut, the last thing you want to have happen is something to go wrong, someone to be left behind, someone to be dead. That is not part of our business."

And so that is where movies like "The Martian" can play a role, observed Weir.

"If the public has an interest in science that drives a market demand for science-based entertainment and when you have guys like [Scott and Damon] making stuff of this quality, you are going to get butts in seats. That's going to encourage more people to make similar movies," he said. "So people are more interested in actual science fiction as opposed what science fiction used to be, which is just fantasy with a scientific skin on it."

While he is realistic, Damon is hopeful that perhaps "The Martian" will make a small difference in advancing getting humans to Mars.

"I don't have any lofty expectations, but I do hope some kids see it and geek out in science and enjoy it," he said. "And maybe it's one thing amongst many other things in their life that might push them in that direction."

Click through to collectSPACE.com to watch the latest movie trailer for "The Martian."