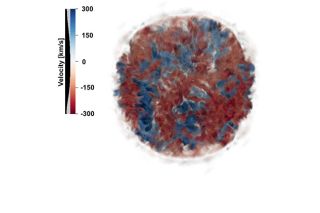 This visualization depicts a massive star about to collapse and explode into a supernova. Researchers found in the new simulation that the wrinkles that develop just before collapse are crucial to detonation.
(Image: © S. M. Couch)

Enormous stars collapse in ultramassive supernova explosions — now in 3D! For the first time ever, researchers have turned back the clock on a star's final moments to simulate how wrinkles in its violent collapse trigger a vast explosion.

As massive stars age, they build up more and more iron in their cores, which cannot be used by the star as fuel. Eventually, when the core gets big enough, it collapses and, sometimes, incites a huge explosion. Most simulations start with a star already on the brink of collapse, with the different layers inside the star in perfect concentric rings. But models with those simplified starting conditions stubbornly refuse to blow.

"Almost all supernova simulations follow about 1 second of physical time," said Sean Couch, a physicist and astronomer at Michigan State University and lead author of the new paper. "What we did that was different is, we wound the clock back 3 minutes. That's really challenging; it's never been done before. We then show this has an important and big impact on the likelihood for successful supernova explosions." [Supernova Photos: Great Images of Star Explosions]

Such a feat was very technologically demanding, but it proved necessary because models starting right at the collapse just wouldn't explode in a supernova, Couch said. Instead, the shock would peter out, and the collapsing star would become a black hole.

"It's the difference between an onion" — the old, simplified starting point — "and cabbage," Couch told Space.com. "You slice cabbage, and there's wrinkles on the inside. It's still basically a sphere, but it's not nearly as concentrically layered as the onion will be."

Those extra few moments, where the "onion" model had the chance to wrinkle into a "cabbage" more like a complex, real star before collapsing, seem to cause enough turbulence to push the system over the edge into a supernova.

Just modeling those extra 3 minutes back in time was a huge technological challenge, Couch said — the simulation on the supercomputer took about one month to complete, and they could run it only once. Therefore, the researchers chose their star carefully: one about 12 million years old, and 15 times the mass of the sun, that they thought would likely go supernova.

To extend their research, the scientists are modeling four types of stars they think might lead to supernovas, and they're hoping to push the simulation even further back in time. Couch said it might be possible to understand and model the forces within a star, to go as far as an hour before the collapse. ("An epic challenge," Couch called it.)

The difficulty with modeling stars is the difference in timescales, Couch said — a star evolves over the course of millions of years, but the supernova mechanism is on a millisecond scale. Incredible levels of precision and complexity are needed to understand that millisecond.

"We know that we've been working with unrealistic initial conditions; it's just only come to light in the last couple of years that it matters," Couch said. "What we're learning now is that the details of these stars matter."

The research was detailed in the July 21 edition of The Astrophysical Journal.