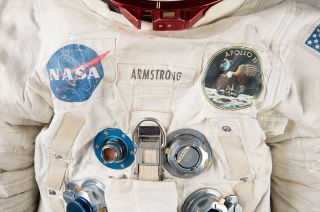 Neil Armstrong's spacesuit that was worn on the moon during the 1969 Apollo 11 mission, seen here in close-up, is the focus of the Smithsonian's "Reboot the Suit" campaign.
(Image: © Smithsonian)

The Smithsonian launched its first-ever crowdfunding campaign on Monday (July 20) in an effort to preserve, conserve and display the spacesuit that Apollo 11 astronaut Neil Armstrong wore while becoming the first man to walk on the moon.

The Washington, DC institution inaugurated a multi-project partnership with the crowdfunding website Kickstarter with "Reboot the Suit," a campaign to raise $500,000 to digitize and exhibit Armstrong's spacesuit at the National Air and Space Museum in time for the 50th anniversary of the first lunar landing mission in 2019. The fundraising effort began 46 years to the day after Armstrong's historic "small step" on July 20, 1969.

"This is the crown jewel of our collection," Cathleen Lewis, who as curator oversees the spacesuits at the National Air and Space Museum, told collectSPACE.com. "Kickstarter is a very new and innovative way to go for the Smithsonian. We haven't done anything like this before." [NASA's Historic Apollo 11 Moon Landing in Pictures]

The campaign seeks to return Neil Armstrong's spacesuit to public display after 13 years of preservation in storage. It will underwrite the research needed to conserve the suit, fund the construction of a support structure and case for its exhibit, and finance a digital scan to document the suit in three dimensions (3D).

"Reboot the Suit" backers will receive rewards that range from a special Armstrong spacesuit mission patch to a 3D print of the astronaut's glove. Other perks include behind-the-scenes experiences and the ultimate opportunity — an invitation to view Armstrong's spacesuit up-close before it goes back on display.

Armstrong, together with Buzz Aldrin, spent just over two and a half hours exploring the moon's Tranquility Base in July 1969. They planted the U.S. flag, deployed scientific instruments, and collected moon rocks to return to Earth, all the while wearing matching Apollo A7L spacesuits that protected them from the extreme temperatures and lack of atmosphere on the lunar surface. [The Apollo 11 Moon Landing Explained (Infographic)]

While the suits were designed to stand up to the rigors of the 8-day mission, they were not built to survive the test of time. More than four decades on Earth have led to their component materials gradually breaking down.

As a result, Armstrong's spacesuit was taken off exhibit in 2006, and with the exception a brief display of the helmet and gloves in response to his death in 2012, the suit has not been seen by the public since.

The Smithsonian now plans to place the suit on temporary display for the 50th anniversary of Apollo 11 in July 2019. It will then go on permanent exhibit as a centerpiece in the National Air and Space Museum's new "Destination Moon" gallery, scheduled to open in 2020.

Before that can happen though, the Smithsonian — led by Lewis and conservator Lisa Young — wants to learn more about the spacesuit's construction to be able to select the best environment for its display.

"We are going to thoroughly research everything about the spacesuit, especially focusing on those details about what happened to it post-flight," Lewis told collectSPACE. "We are going to use state-of-the-art observation tools in terms of imaging, including CAT scanning, 3D imaging and other forms of photogrammetry — hopefully even looking in UV and IR to look under the surface – to document everything about the suit."

The careful and time-consuming work will look at how the suit's materials were manipulated during its construction, as well as how the suit was handled after Armstrong wore it on the moon.

"We want to find out more about what NASA did after the post-flight testing," Lewis explained. "Everyone knows the famous story about sending the suit to the dry cleaners — that was at the time was the best and standard option for conservation of costume materials and textiles. We have documentation on that from NASA and [the manufacturer] ILC Dover, but we want to find out more."

"We know there were repair patches made and we want to know more about that and who performed that work," she said.

The spacesuit's conservation will not only further historic research and provide expanded educational opportunities — the digital scans, for example, will provide educators, students and the public the chance to print 3D models of the spacesuit for a hands-on inspection — but it will also inform how the artifact is put on display.

"Another part of the work that will be going on for a long period of time will be searching out and finding a case that will be airtight and filter enough UV and light radiation such that the spacesuit will be able to remain on display for a long period of time," Lewis said. "We'll also be looking for climate systems, which didn't exist decades ago, that will fit in the case and maintain an environment very similar to how the suit is being stored today."

Just as important as the case will be the support structure on which the spacesuit will be held in place.

"What people refer to as the mannequin — we're trying to get away from that term because of some of the previous connotations — but we are going to be working to design a support structure that will allow the [controlled] climate to circulate through the inside of the suit," Lewis described. "That way, we'll be able to arrange the spacesuit in such a way that it will almost look at though the suit is completely assembled."

"We will have a climate system, a support structure and a case that will allow people to really relive those first steps on the moon," she said.

The choice to turn to Kickstarter now to "Reboot the Suit" stems from how the Smithsonian is funded. [Related: How Crowdfunding Helps New Space Projects Launch]

"The Smithsonian receives 70 percent of its appropriations from the federal government and that amount covers staff salaries, building support and maintenance, and not much more" said Lewis. "It has been a very long time since we have been able to use the appropriations for programming, exhibits and special projects."

Traditionally, the institution has had to rely on large private donations and corporate pledges, such as the $30 million Boeing provided for the renovation of the National Air and Space Museum's Milestones of Flight Gallery, set to open in 2016.

"Through Kickstarter ... the public will have the chance to contribute to specific Smithsonian projects and follow the creative process, regardless of their level of support," said Yoonhyung Lee, the director of digital philanthropy for the Smithsonian, in a statement.

In addition to helping put Armstrong's suit back on display and receiving rewards through their support on Kickstarter, backers' donations are also tax deductible.

Click through to collectSPACE to watch a video about the Smithsonian’s ‘Reboot the Suit’ crowdfunding campaign.