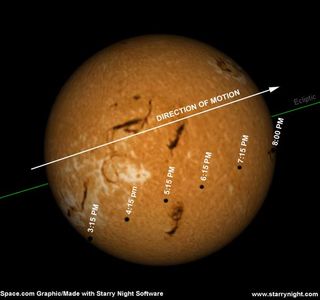 In November, the planet Mercury will make a rather feeble attempt to eclipse the Sun.

But this time the setup will produce a striking celestial phenomenon that can be viewed with small telescopes when Mercury's tiny silhouette slowly crosses in front of the solar disk [image].  Astronomers refer to such an event as a "transit."

Care must be taken to view the event with proper filters to avoid eye damage.

With proper viewing filters, the transit will be visible with small telescopes. Viewers should use special, approved filters that can be purchased from reputable dealers of astronomy products.

The Sun's image and the shadow of Mercury can also be projected through a telescope onto a white screen, sheet of paper or wall.

The entire transit from start to finish will be visible in its entirety only from the west coast of North America, (including central and southern Alaska), Hawaii, New Zealand and the east coast of Australia.  From Australia and New Zealand the transit will occur on the morning of Nov. 9.

From the United States, those situated to the east of a line running from roughly northern Idaho to westernmost Texas will be able to see the beginning stages of the transit, but sunset will intervene before Mercury can move off the Sun's disk [map].

The tiny disk of Mercury will begin moving on to the Sun at 2:12 p.m. EST (11:12 a.m. PST) and will take about 2 minutes to move completely onto the Sun's disk. The planet will be recognizable along the lower left edge of the Sun as a tiny, black, sharp-edged dot, but having only 1/194 the Sun's diameter.

Just under five hours later, Mercury will reach the Sun's right (west) edge. Mercury will take about 2 minutes to move completely off the disk of the Sun, beginning at 4:08 p.m. PST.

In those eastern regions where the Sun will set before the transit ends, a good observing site should have a low horizon to the south of due west.  It is a good precaution to check the Sun's setting point a day or two beforehand, to verify that trees or buildings do not block the view.

Unlike a transit of Venus, a transit of Mercury is not visible with the unaided eye.  A telescope must be used, magnifying at least 30-power to bring out the "dark dot" of Mercury in silhouette against the Sun's disk.

Eye safety is always a prime concern when dealing with the Sun.  Never look directly at the Sun through a telescope!  Rather, you should project the enlarged solar image onto a white card or screen or use proper, approved solar filters.

SPACE.com will provide more observing details and information about the transit on Nov. 3.