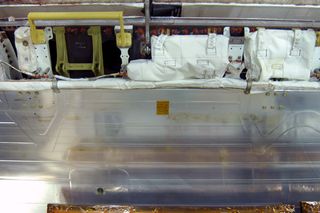 An unknown object pierced a radiator mounted to one of two cargo bay doors aboard NASA'sshuttle Atlantis during its Septemberspaceflight, but did not endanger the vehicle or its six-astronaut crew atany time, the space agency said Thursday.

"Althoughit's small, by comparison it may be the second largest impact we've been ableto detect on a payload bay door," NASA spokesperson Kyle Herring told SPACE.com."It did not do any other damage to the vehicle other than penetrate theradiator."

Accordingto a schematicof the damage, the unknown object - either a micrometeoroid or other pieceof orbital debris - caused a small, one-tenth of an inch (2.5-millimeter) puncturein Atlantis' aft starboard radiator and appeared to leave a 0.031-inch (0.7-millimeter) exithole and a nearby crack.

"The natureof the object that hit the shuttle radiator isn't known," a NASA update said,adding that shuttle processing crews discovered the hole while working on thespacecraft.

The impactalso damaged a one-inch (2.5-centimeter) area in the radiator's honeycomb-likealuminum mesh, but did not sever any of the panel's 26 vital coolant tubes asit passed through the half-inch wide panel.

Even if thebreach had severed one of the coolant tubes, Atlantis carries two redundant coolinglines, Herring said, adding that a Freon loop breach in one loop would have ledthe shuttle's onboard software to shut down the damaged system.

About 70percent of the orbiter's cooling needs could be met by one cooling loop, thoughthe situation would prompt discussions of whether to power down non-vitalelectronics or returning to Earth early depending on the mission's timeline, headded.

"It becomesa discussion and not an emergency situation," Herring said.

Atlantis'STS-115 astronauts - commanded by veteranshuttle flyer Brent Jett - conducted threein-depth scans of their spacecraft, though most of them were aimed atevaluating the health of the orbiter's heat shield and not its payload bay.

"This isexactly why we instituted the late inspection in this program," Herring said. "We'veknown for the life of this program that [micrometeorite and orbital debris] wasa top risk to the space shuttle. Definitely in the top five, and maybe in thetop three."

Just beforelanding, flight controllers and the astronauts themselves noted several items -later dubbed "mysteryobjects" - that appeared to have floated out of Atlantis' payload bay aftera series of thruster tests. The debris prompteda third and final round of heat shield inspection.

That scan alsoincluded a camera survey of Atlantis' payload bay to search for any missingobjects, and mission managers later gave the shuttle a cleanbill of health and clearedits crew for landing.

Mission managersdid not report any signs of the radiator impact after the payload bay survey. Theregion is not subjected to the severe heating stresses of atmospheric reentry,and would not have posed a threat to the orbiter during its Earth return, NASA officialshave said.

NASA haskept a close watch on launch and orbital debris since the loss of sevenastronauts and their spaceshuttle Columbia during reentry on Feb. 1,2003.

The vitalheat shield on Columbia's left wing leading edge - an area that sees some ofthe highest temperatures during reentry - was breached by a suitcase-sizedchunk of foam insulation from orbiter's external fuel tank 16 days earlier duringlaunch, and led to its destruction. NASA has since taken great strides toprevent foam insulation debris during launch, an effort that led to two,near-flawless launches this summer.

The damageseen on Atlantis' radiator - while not a threat to the spacecraft or its crew -is indicative of the potential impacts from micrometeoroids and orbital debris(MMOD) to spacecraft in flight. It is that hazard that prompted shuttle managersto addthe second heat shield inspection to July's STS-121mission and subsequent spaceflights.

"In simpleterms, there is a risk that you could be struck my MMOD," Atlantis' lead shuttleflight director Paul Dye said last month during the STS-115 mission, addingthat the risk is small but always present for any piloted spacecraft. "So wethink it's a prudent thing to take a look."

Thespaceflight is slated to launch no earlier than Dec. 7 at 9:38 p.m. EST (0138Dec. 8 GMT) and mission managers discussed the mission's planned night launch,which would be the first since the Columbia accident, in a Thursday meeting.

"Theconsensus was that restoring night launch capability for the shuttle does notimpose any additional risk to the safety of the vehicle or the crew," Herringsaid. "Clearly launching in daylight is desirable, but everyone agreed it's notrequired."