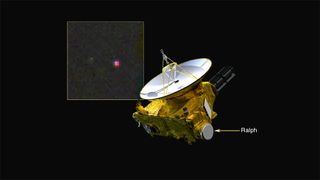 With less than two weeks until its historic close encounter with Pluto, NASA's New Horizons probe has detected methane ice on the surface of the dwarf planet.

Methane was first discovered on Pluto in 1976, so the find by New Horizons is not surprising. But the probe's ability to see methane and other chemicals on the planet's surface demonstrates that the distance is closing between these two bodies. New Horizons will be the first probe to make a close flyby of Pluto, on July 14.

With the announcement of the methane detection, the mission team also released a series of new images of Pluto and its largest moon, Charon, which are steadily coming into focus as the probe nears its target.

Methane can be found underground and in the atmosphere on Earth, and is the product of both organic and inorganic processes.

The source of methane on Pluto is currently unknown: it could be primordial, having come from the chemical soup that eventually formed the solar system 4.5 billion years ago.

"Soon we will know if there are differences in the presence of methane ice from one part of Pluto to another," Will Grundy, the composition team leader for New Horizons, said in a statement.

A few hours after New Horizons makes its closest pass by Pluto, the spacecraft's instruments will have the opportunity to observe sunlight moving through the dwarf planet's atmosphere.

"It will be as if Pluto were illuminated from behind by a trillion-watt light bulb," said Randy Gladstone, a New Horizons scientist from the Southwest Research Institute in San Antonio, Texas.

This light will help the probe's instruments determine the composition of Pluto's atmosphere.

New Horizons left Earth in January 2006 to make the journey of more than 9 billion miles to the Pluto system. Traveling at more than 30,000 miles per hour, the space probe is rapidly closing in on the dwarf planet and its five known moons (and searching for new moons is one of the mission goals).