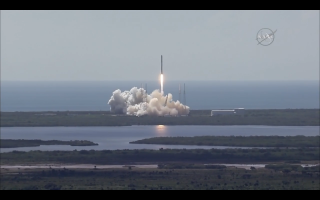 The three crewmembers currently aboard the International Space Station are in no danger of running out of crucial supplies despite today's failure of a SpaceX cargo mission to the orbiting lab, NASA officials said.

A SpaceX Falcon 9 rocket carrying the company's robotic Dragon cargo capsule exploded just over two minutes after launching from Florida's Cape Canaveral Air Force Station at 10:21 a.m. EDT (1421 GMT) today (June 28). Despite this being the third space station resupply vehicle to fail to reach its target in the last eight months, NASA officials said the crew is well stocked through October, with more supplies due to be delivered in the coming months.

Michael Suffredini, NASA's International Space Station program manager, said in a press conference today following the rocket explosion that the current supply situation would have to be much more dire to consider bringing the current crewmembers home. In addition, there are no plans to cancel or reschedule the arrival of three new crewmembers to the station in July. [Explosion! SpaceX CRS-7 Mission Ends In Disaster (Video)]

Freighters headed for the International Space Station carry a mixture of scientific experiments, equipment and hardware for the station, and supplies for the crewmembers who live there. Those supplies can include essentials like food, water and oxygen, as well as items not crucial for survival.

Suffredini explained that the station is normally loaded with enough supplies to support the crew for six months; currently, the station is stocked for four months.

"If you have no means to get supplies up [to the station] at about 45 days before you get to zero, that’s when we get into the process of planning the return of the crew," Suffredini said. "If the time comes and we decide we don't have the logistics to support the crew, we always have a vehicle there that can bring them home safely. And we would certainly do that, but we're not even close to that kind of conversation today based on the logistics we have on board."

SpaceX's robotic Dragon cargo vehicle is the third resupply craft that has failed to reach the orbiting station in the last eight months. In October, an Orbital ATK Antares rocket exploded seconds after it pushed off the launch pad carrying Orbital's Cygnus resupply spacecraft. And the Russian Progress 59 cargo vehicle successfully separated from its Soyuz rocket after its April launch but fell back to Earth before making its delivery.

More supplies are scheduled to be delivered to the station as early as next weekend onboard the uncrewed Russian Progress 60P cargo vehicle, which is set to launch on July 3. Suffredini said that mission should provide the station crew with roughly an additional month's worth of supplies. In addition, a Japanese HTV supply vehicle is scheduled to rendezvous with the station sometime in August.

Meanwhile, a Russian Soyuz spacecraft carrying three new station crewmembers is scheduled to leave for the orbiting laboratory on July 22. The newcomers will join the three crewmembers currently on board: cosmonauts Gennady Padalka and Mikhail Kornienko, and NASA astronaut Scott Kelly. Kelly and Kornienko are participating in a one-year mission aboard the station.

"Certainly if we didn't see any vehicles on the horizon today, we would be considering whether or not to fly the three [upcoming] crew that we have ready," Suffredini said. "But again that's not the position we're in."

NASA officials emphasized in the press conference that while the loss of the SpaceX cargo vehicle was a disappointment, the agency has made contingency plans for these types of setbacks.

Gwynne Shotwell, SpaceX's president and COO, said in the press conference that it is not yet clear what caused the explosion. Elon Musk, the company's founder and CEO, tweeted shortly after the explosion that there was an "overpressure event in the upper stage liquid oxygen tank," but Shotwell could not offer any more information about that event or whether it played a part in the rocket explosion. She did note that the rocket's first stage separation appears to have proceeded nominally.

This is SpaceX's seventh resupply mission to the International Space Station; the previous six missions were all successful. The company holds a $1.6 billion contract with NASA to fly at least 12 unmanned cargo missions to the orbiting outpost.