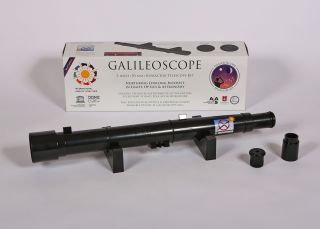 A low-cost telescope designed to help students around the world appreciate the wonders of the cosmos is now available in a special edition to celebrate the 2015 International Year of Light.

The makers of the 2-inch-wide (50 millimeters), 25- to 50-power "Galileoscope" — which takes its name from famed Italian astronomer Galileo Galilei — have produced 20,000 special-edition kits in honor of the 2015 International Year of Light (IYL 2015). The United Nations initiative aims to raise awareness and appreciation of the optical sciences.

"In the process of assembling the Galileoscope, students explore fundamental optical concepts such as how lenses form images," IYL 2015 officials wrote in a statement.

Once the telescope is assembled, they added, students "enjoy sharp views of lunar craters and mountains, Jupiter's moons, Saturn's rings, the phases of Venus and other bright celestial objects."

The Galileoscope was first created for the 2009 International Year of Astronomy to provide a low-cost but high-quality telescope for audiences who may not have usually had access to astronomy equipment.

Since then, more than 225,000 Galileoscopes have been distributed in 100 countries. IYL 2015 and the International Astronomical Union have declared the Galileoscope a "Cosmic Light cornerstone project" and said they hope to put 100,000 more of the telescopes in use this year.

"The kit is augmented with free, standards-based optics-education and observing activities, available in multiple languages," officials wrote. "These well-tested activities can be used by classroom and after-school teachers, as well as informal educators, to provide a rigorous approach to teaching science and the process of science."

Organizations that have used Galileoscopes in their training include the U.S. National Optical Astronomy Observatory (NOAO), the Astronomical Society of the Pacific (ASP) and the Galileo Teacher Training Program (GTTP), IYL 2015 officials said.

More information about the Galileoscope is available at http://galileoscope.org.