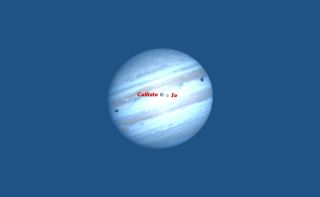 On Wednesday night, May 20, the shadows of Jupiter’s moons Ganymede and Io will cross Jupiter’s face. This shows the shadows at 8:10 p.m. EDT, just after Io’s shadow has started across, and just before Ganymede’s shadow leaves.
(Image: © Starry Night Software)

Jupiter's rapidly moving moons constantly surprise us with their dance around the giant planet. There will be two spectacular shadow plays this week.

Jupiter's moons are very small, even in a large telescope, but their shadows are slightly larger, and can often be seen crossing Jupiter's face with a good amateur telescope. I've seen the shadows with telescopes as small as 90mm aperture, but a telescope with 6-inch or larger aperture will show them much more clearly. Clear weather and steady atmospheric conditions are also essential.

If you live on the eastern seaboard, look for Jupiter just after sunset tonight (May 20) around 8:10 p.m. EDT (0010 GMT). Weather permitting, the first thing you will notice is that only two of Jupiter's usual four moonsare visible. That's because two of the moons, Io and Callisto, are in front of Jupiter's disk, and are said to be "in transit."You probably won't see Io, because its color and brightness blend in so well with the cloud tops behind it. You may be able to see Callisto because its dark surface stands out against Jupiter's bright clouds. I usually see it as a tiny greyish spot. [Rare Photos: Jupiter's Triple-Moon Conjunction]

Look more closely, and you'll see two small dark shadows on Jupiter's face. One of these is Io's shadow, but the other is not the shadow of Callisto. Instead it is the shadow of Ganymede, off to Jupiter's right. That's because of the angle at which the sun is illuminating the tableau.

Take another look later in the evening, around 9:55 p.m. EDT (01055 GMT), and you'll see that Ganymede's shadow has left the disk and that Io's shadow is about to be hidden behind Callisto. This will be the first time I have ever seen a moon's shadow eclipsed by another moon.

Also keep a lookout for Jupiter's Great Red Spot, though it is not nearly as "great" nor as "red" as it once was. It's more usually seen as a light notch in the North edge of Jupiter's South Equatorial Belt. At moments of steady seeing, its salmon pink color may appear briefly.

At around 11:48 p.m. EDT (0348 GMT), Io's faster moving shadow will actually pass Ganymede's, and the two shadows merge. Once again, the Great Red Spot should be in evidence.

If you live west of the Eastern time zone, be sure to subtract the appropriate corrections from the times given above: 1 hour for CDT, 2 hours for MDT, and 3 hours for PDT.

Editor's note: If you capture an amazing telescope view of Jupiter's moons as they transit the planet, send photos and comments in to spacephotos@space.com for a possible story or gallery.