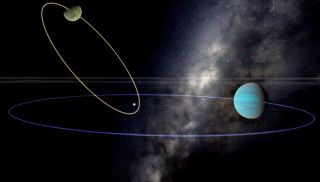 This artist's concept shows the orbit of a potentially habitable planet being perturbed by a Neptune-mass world.
(Image: © Rory Barnes)

"Chaotic planets" that possess wildly unpredictable orbits and climates likely circle distant stars, suggesting that some alien worlds that look habitable might actually be hostile to life for millions of years at a time, a new study reports.

In the past two decades or so, astronomers have confirmed the existence of more than 1,800 exoplanets or planets orbiting distant stars. These worlds often differ greatly from any planets in our own solar system. For instance, so-called "hot Jupiters" are gas giants that lie closer to their host stars than Mercury does to the sun.

One possible kind of exoplanet system that researchers suggest could exist has planets whose orbital periods are nearly complete multiples of each other. For example, if one planet takes 100 days to complete an orbit — that is, the planet's "year" lasts 100 days — then other planets in that system could have orbital periods of about 200 days, 300 days and so on. [The Strangest Alien Planets]

If planets do have orbits with such "integer multiple" relationships to each other, they will regularly pull on each other at the same place in their orbits, creating a force whose effect amplifies over time in what is known as resonance. One instance of resonance is how a playground swing will climb higher from repeated pushes. Another well-known example can be seen when an opera singer hits just the right note to cause a champagne glass to resonate and shatter.

Now scientists find these repetitive gravitational tugs can grow slowly over millions of years to have major effects.

"What we found was that things go all haywire," study lead author Rory Barnes, an astronomer at the University of Washington, said in a statement. "Those little perturbations that keep happening at the same point cause one of the orbits to do some crazy things — even flip over entirely — and then kind of come back to where it was before. It was pretty unexpected for us."

The researchers modeled pairs of exoplanets whose orbits were in resonance around sunlike stars. These planets were also mutually inclined — that is, their orbits were angled against each other. The planets ranged from about the mass of the moon up to 40 times that of Earth.

The scientists found these resonant, mutually inclined systems are chaotic in nature, meaning the way they evolve is very sensitive to disturbances. Over time, it becomes virtually impossible to predict how chaotic systems like the weather will evolve, a phenomenon that has been termed the "butterfly effect," because a butterfly beating its fragile wings in the rainforest could theoretically set a storm in motion thousands of miles away.

Such chaos can alter a planet's orbit. This in turn could wreak havoc on its climate, since the distance of a planet around its star over time is a major factor in climate changes.

"You would never know when the next ice age or hot spell was coming," Barnes told Space.com. "In many cases, the changes can take thousands of years to occur, so they wouldn't be changes over your lifetime, but they would certainly impact the rise and fall of civilizations as rapid and constant climate change transformed deserts into ice fields and tropical rainforests into oceans."

This chaos might even lead a planet's orbit to become so eccentric — that is, elongated — "that a planet could slam into its host star — an extreme form of climate change!" Barnes said in the statement.

These findings should influence where astronomers look for exoplanets that might host life as it is known on Earth. Hunts for extraterrestrial life usually focus on "habitable zones," the areas around stars where it is warm enough for a world to have liquid water on its surface. However, chaos might lead a planet currently in a habitable zone to develop an orbit and climate severe enough to either inhibit life or sterilize the planet if life has already begun, Barnes said.

"Planets in systems that drive orbits to near misses with the host stars are less promising targets and should be skipped over for other candidates, even if they are found today in circular orbits in the habitable zone," Barnes said in the statement.

The researchers determined that the exoplanet systems HD 73526, HD 45364 and HD 60532 may be chaotic in nature. The study team also noted that the Gaia space telescope, which the European Space Agency launched in 2013, could soon detect many chaotic Jupiter-size planets.

"The biggest question is likely to be how common these systems are, which we don't know yet," Barnes said. "These may be galactic oddities, or they could be a small but significant minority."

The scientists detailed their findings online March 11 in The Astrophysical Journal.