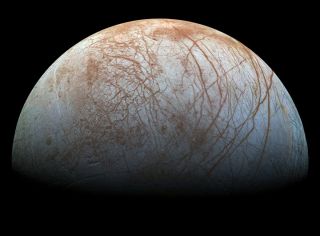 The reddish-brown lines that crisscross the icy surface of Jupiter's moon Europa may be radiation-bombarded sea salt from an underground ocean, a new study suggests.

Researchers probing the nature of the mysterious Europa features put run-of-the-mill salt (sodium chloride) and salt-water mixtures in a vacuum chamber chilled to minus 270 degress Fahrenheit (minus 173 degrees Celsius), then blasted the samples with electrons.

"We call it our 'Europa in a can,'" study lead author Kevin Hand, of NASA's Jet Propulsion Laboratory (JPL) in Pasadena, California, said in a statement. "The lab setup mimics conditions on Europa's surface in terms of temperature, pressure and radiation exposure. The spectra of these materials can then be compared to those collected by spacecraft and telescopes." [Photos: Europa, Mysterious Icy Moon of Jupiter]

Hand and co-author Robert Carlson, also of JPL, found that a few dozen hours of radiation treatment — the equivalent of perhaps 100 years of Europa-level exposure — turned the salt from white to a yellow-brown color similar to that of the Europa lines, which trace geologically young fractures on the moon's surface.

"This work tells us the chemical signature of radiation-baked sodium chloride is a compelling match to spacecraft data for Europa's mystery material," Hand said.

Further, the salt samples turned darker the longer they were exposed to the electron beam, suggesting that researchers might be able to estimate the ages of some Europa features based on their color, Hand said.

The new study, which has been accepted for publication in the journal Geophysical Research Letters, could help researchers better understand processes occurring on Europa, which astrobiologists regard as one of the solar system's best bets to host alien life.

"We have many questions about Europa, the most important and most difficult to answer being, Is there life?" Curt Niebur, Outer Planets Program scientist at NASA Headquarters in Washington, said in the same statement.

"Research like this is important because it focuses on questions we can definitively answer, like whether or not Europa is inhabitable," he added. "Once we have those answers, we can tackle the bigger question about life in the ocean beneath Europa's ice shell."

NASA is currently developing a mission to Europa, which will launch in the early to mid-2020s. While details are still being ironed out, the mission will probably send a spacecraft to Jupiter orbit; it will then make dozens of flybys of Europa over the course of three to four years, assessing the moon's habitability and perhaps also searching for signs of life.