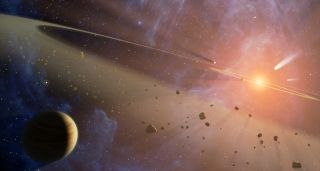 Researchers have reproduced a wide array of building blocks for life in a prebiotic scenario involving meteorites and the solar wind.

They began with formamide, a simple organic compound that's ubiquitous in the universe. Formamide has been detected in galactic centers, star-forming regions and interstellar space, as well as comets and satellites.

They then added meteorite powder as a catalyst, and irradiated the solution with high-energy proton beams to simulate the solar wind. They obtained a rich blend of complex biological molecules including amino acids, carboxylic acids, sugars and nucleobases (the basic building blocks for DNA and RNA). [7 Theories on the Origin of Life]

Among the products were also the nucleosides cytidine, uridine, adenosine, and thymidine, which are more advanced building blocks consisting of a nucleobase linked to a sugar molecule. Nucleosides are notoriously difficult to recreate under prebiotic conditions.

"We were very surprised to see those," said Raffaele Saladino of Tuscia University in Italy.

The ingredients for life have previously been recreated under a variety of possible terrestrial scenarios, some involving lightning, ultraviolet radiation, hydrothermal vents or meteorite impacts. The new findings expand the range of possibilities to prebiotic environments beyond the early Earth, including the small, wandering bodies on our solar system.

The results were published last month in the Proceedings of the National Academy of Sciences.

The team had previously synthesized some of the building blocks (but no nucleosides) by subjecting formamide to very high temperatures, simulating conditions near volcanoes or upon meteorite impact on the early Earth.

By instead irradiating formamide with high-energy protons, they obtained a higher yield of amino acids and nucleobases, as well as other relevant biomolecules including the nucleosides.

He added: "Carbon chemistry works the same anywhere in the universe, and every star produces solar wind. This tells us that life could well be universal."

Interestingly, the scenario produced a high quantity of precursors for both metabolic and genetic pathways (the carboxylic acids and nucleobases respectively.) An ongoing debate in the origin of life is whether metabolism or genetics emerged first. Here, the findings suggest that both processes could have emerged simultaneously.

Other findings have also suggested that meteorites may have seeded the ingredients for life on the early Earth, notably during the Late Heavy Bombardment, a period when the inner planets were pummeled by frequent impacts about 4.1 to 3.8 billion years ago. In particular, some simple amino acids, sugars and nucleobases have been found inside meteorites, albeit in very small proportions.

Here, the researchers wanted to go beyond the idea of meteorites as mere carriers of organic molecules. They tested the catalytic properties of 11 meteorites belonging to the four major classes — iron, stony iron, chondrites and achondrites — but first treated the rock powder to remove any trace of organics.

"Meteorites are not merely shuttles for organics, as suggests the common point of view," Saladino says. "They are also reactors that can synthesize biomolecules during their lives."

The findings come with an important caveat.

"I'm extremely enthusiastic about this piece of work because they obtained much more than the nucleobases," said Steven Benner, an origin-of-life chemist at the Foundation for Applied Molecular Evolution at the Westheimer Institute in Gainesville, Florida, who wasn't involved in the new study. "They combined formamide and rock chemistry and got so many building blocks — that's what makes this paper important."

"But the catch is that the total mass of meteorite that's coming in after the moon-forming event is negligible," he added. "You can't rely on the Late Heavy Bombardment to bring you much in terms of organics. Besides, that amount of carbon is negligible compared to what's here on Earth already."

Indeed, formamide, the starting molecule in their experiment, is readily made from hydrogen cyanide and water — two compounds that were abundant on the early Earth.

"My view is that we have to solve the problem with what's here on Earth before we go looking at meteorites," Benner said, "just because of the amount of material that's coming in."