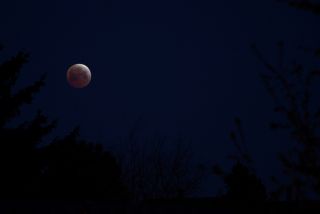 The shortest lunar eclipse of the century created a "blood moon" over parts of the United States and the Pacific Ocean on April 4.
(Image: © Joe Wiggins)

A company called Tethers Unlimited is developing an in-space construction system that would use robots resembling arachnids to build structures that are too large or fragile to be sent up whole. The company says this system would require sending raw materials like carbon fiber into orbit. The company has received two rounds of funding from NASA Innovative Advanced Concepts (NIAC). [Full Story: Incredible Technology: Spiderlike Robots Could Build Giant Space Structures]

On Monday afternoon (April 13), the private spaceflight company SpaceX will launch a Dragon 9 rocket and attempt (for a second time this year) to recover the first-stage booster. A previous attempt to land the booster failed, with it crashing into the landing pad. Recovering the booster is part of he company's effortto make its rockets fully reusable. [Full Story: SpaceX to Try Daring Rocket Landing Again Monday]

Origins of a Russian fireball discovered

A blazingly bright meteor that flashed through the sky near the Finnish-Russian border in April 2014 apparently had a very similar path to an asteroid that will make a close pass of the moon in 2017. [Full Story: Explosive Culprit? Russian Fireball's Origins Found]

The NASA-funded Asteroid Terrestrial-impact Last Alert System, or ATLAS, would give humans early warning if a large asteroid were headed toward Earth. The camera and telescope for ATLAS were tested last month, and scientists with the project say they've achieved "First Light." [Full Story: Asteroid Early-Warning System for Potential Impacts Makes Progress]

It's a win for the exploration of icy locations beyond Earth: The German Aerospace Center's (DLR) Enceladus Explorer (EnEx) project successfully drilled through the crust of a glacier and extracted an uncontaminated water sample that had been trapped beneath the ice for millions of years. The project has its eyes on the exploration of Saturn's moon Enceladus, which hides an entire ocean underneath about 24 miles (39 kilometers) of ice. [Full Story: IceMole Drill Built to Explore Saturn's Icy Moon Enceladus Passes Glacier Test]

The first 3D printer in space, currently aboard the International Space Station, is about to be put to the test. The first 21 items created by the printer in microgravity are back on Earth and are undergoing tests to determine whether or not they hold up as well as parts printed on the ground. [Full Story: 1st Parts from 3D Printer in Space About to Get a Close-Up (Video)]

The European Rosetta spacecraft is getting a little confused by the changing weather around Comet 67P/Churyumov-Gerasimenko. As the comet gets closer and closer to the sun, Rosetta detects an increase in gas and dust coming off the comet, which has caused some problems for the spacecraft's navigation system. [Full Story: Rosetta Spacecraft Gets Confused by Rough Comet 'Weather']

Will humans find signs of alien life in the 2020s?

High-ranking NASA scientists say humans have the tools and knowledge to find "strong indications" of the existence of life beyond Earth by 2025, and definitive evidence within 20 to 30 years. [Full Story: Signs of Alien Life Will Be Found by 2025, NASA's Chief Scientist Predicts]

A collision between the Earth and a rock the size of Mars may have created the debris that eventually formed the moon, two new studies suggest. This "Giant Impact Hypothesis," first proposed in the 1970s, is riddled with unanswered questions, some of which the new studies may resolve. [Full Story: How the Moon Formed: Violent Cosmic Crash Theory Gets Double Boost

NASA's New Horizon's mission is rocketing toward Pluto at more than 30,000 miles per hour, which means a collision with even a small piece of debris could be devastating for the mission. So scientists outfitted the probe with a layer of Kevlar, and have a series of back-up plans if a crash looks imminent. [Full Story: Bulletproof Vest Shields NASA's Pluto-Bound Spacecraft (Exclusive Video)]