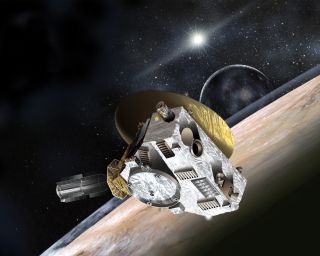 Wondering how the space weather will be around Pluto this summer? Scientists working with NASA's New Horizons mission are predicting gusts of charged particles with speeds up to 1 million mph (1.6 million km/h) that will slow as they interact with the dwarf planet's atmosphere.

New Horizons, which will make a highly anticipated flyby of Pluto on July 14, has already been sampling the space weather environment in the Kuiper Belt, the ring of icy bodies beyond Neptune.

"Results from those measurements are being radioed to the ground, and our team is already learning new things about the distant environment near Pluto's orbit, 3 billion miles [4.8 billion kilometers] from Earth," New Horizons principal investigator Alan Stern, of the Southwest Research Institute (SwRI) in Colorado, said in a statement. [Photos from NASA's New Horizons Pluto Probe]

Despite the fact that Pluto lies an average of more than 3.6 billion miles (5.8 billion km) from the sun, the dwarf planet still feels the effects of the same solar wind that interacts with Earth's atmosphere. New Horizon's Solar Wind Around Pluto (SWAP) and Pluto Energetic Particle Spectrometer Science Investigation (PEPSSI) instruments are helping scientists on Earth understand how that wind is behaving near Pluto, mission team members said.

The solar wind — filled primarily with protons and electrons, but also with trace amounts of ionized helium and oxygen — surges outward at speeds of up to 275 miles (500 km) per second. Near Pluto, the wind is spread thin, about 1,000 times less dense than it is near Earth, and a hundred billion billion times less dense than Earth's atmosphere at its surface, researchers said.

Pluto has an atmosphere, which is composed primarily of nitrogen, with traces of carbon monoxide and methane. But the dwarf planet's air is extremely thin, and it's slowly escaping into space.

"For some unknown reason, the sun has been blowing less hard over the past decade and a half, and we are seeing the weakest solar wind of the space age," New Horizons co-investigator Dave McComas, also of SwRI, said in the same statement. "A weaker solar wind means that the size of the region where the solar wind interacts with the planet's escaping atmosphere is expanded beyond our earlier predictions."

Mission co-investigator Fran Bagenal, from the University of Colorado, Boulder, added, "This means that New Horizons may cross the interaction boundary between the solar wind and Pluto's atmosphere up to dozens of Pluto radii — and several hours — before its closest approach on July 14, creating a scientific bonanza for studies of the composition and escape rate of Pluto's atmosphere."

The $700 million New Horizons mission launched in January 2006. The spacecraft may make a flyby of another Kuiper Belt object in 2019, if NASA approves and funds a proposed extended mission.