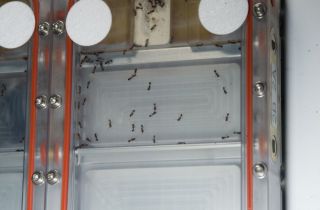 An experiment on the International Space Station looked at how ant colonies responded to the extreme environment of microgravity when trying to solve their collective need for resources.
(Image: © NASA)

In 2014, the International Space Station (ISS) took on some unusual passengers: eight groups of ants, which were observed trying to perform searches under microgravity conditions. The goal? To learn more about how these tiny creatures search an area collectively and how they adapt to changing conditions —without any centralized control over the effort.

The hope, according to researchers behind the study, is that one day such knowledge could be applied in areas such as robotics, where autonomous search-and-rescue robots might be able to search more thoroughly using better algorithms.

The results of the ISS observations, led by Stanford University biologist Deborah M. Gordon, have just been published in the journal Frontiers in Ecology and Evolution.

The study used as its test subject the familiar pavement ant (Tetramorium caespitum). As the video below — created to show students how to recreate the experiment — demonstrates, a special habitat housed the ants.

A small chamber served as the nest area. When researchers wanted to test the ants' search behavior, they released a gate that allowed them into a small search enclosure. In smaller spaces, according to Gordon, the ants can "afford" to search more thoroughly. They know they are in a small space because "ant density" is high and they keep bumping into each other.

When the researchers wanted to observe the ants searching a less crowded, bigger space, they opened another gate to make the search area that much wider. In wider spaces, ants tend to understand they have to stretch out and use straighter search paths to maximize coverage.

The results? The team learned that even in microgravity, where they kept losing hold of the walls as well as their sense of how much space needed to be searched, the ants were still able to search collectively — albeit differently than they would on Earth. And they showed "remarkable" skill at regaining contact with the container's surface.

Next Gordon hopes to learn how different species of ant perform in the same experiment. To that end, she has set up a lesson plan that shows students how to do just that.

As the paper's author's wrote: "By repeating this experiment on Earth with different species of ants, we are likely to discover many new distributed algorithms for collective search, and to learn about how evolution has shaped collective behavior in response to local conditions."