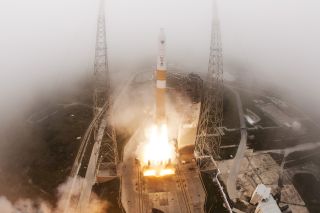 Here's your chance to name a rocket.

United Launch Alliance — the rocket company that launched NASA's New Horizons probe to Pluto — is asking people around the world to help name a new kind of booster. People have until April 6 to vote on three names — Eagle, Freedom or GalaxyOne — for the ULA rocket that the company plans to use for most of its future launches.

The three names are finalists from more than 400 suggestions submitted by ULA employees and space enthusiasts earlier this year. The rocket's first flight is planned for 2019.

"ULA's new rocket represents the future of space — innovative, affordable and reliable," Tory Bruno, ULA's president and CEO, said in a statement. "More possibilities in space means more possibilities here on Earth. This is such a critical time for space travel and exploration and we’re excited to bring all of America with us on this journey into the future."

Private company SpaceX launched a lawsuit against the U.S. Air Force regarding the sole-source contract as SpaceX looks to break into the market with its Falcon 9 rocket. The lawsuit was later settled and SpaceX will compete with ULA for the next round of military launches.

As U.S. tensions with Russia mounted last year, ULA received criticism for its RD-180 Atlas V rocket engine that is manufactured in Russia. Congress has imposed a ban on the engine's use by 2019, according to the Washington Post.

Notable launches for ULA include NASA's Spirit, Opportunity and Curiosity Mars rover missions; ULA also put all 57 GPS satellites orbiting Earth today into space. The company says it has a 100 percent success rate for the past 94 launches.

Votes for the new rocket can be submitted online at this website: https://www.polleverywhere.com/voteula. Alternatively, voters can text 22333 to do their votes using the following keys: ULA1 for "Eagle," ULA2 for "Freedom" or ULA3 for "GalaxyOne." Text messaging fees may apply.