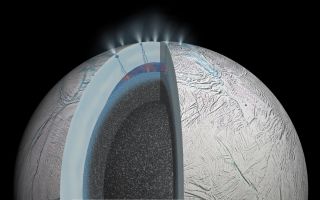 A hydrothermal system on Enceladus

Scientists have found evidence of active hydrothermal vents on Saturn's ice-covered moon Enceladus. Conditions deep in Enceladus' subsurface ocean may therefore be similar to those that gave rise to the first life on Earth. [Full Story: Hot Springs on Saturn's Moon Enceladus Powered by Hydrothermal Vents]

A Russian Soyuz spacecraft touched down on the steppes of Kazakhstan Wednesday night (March 11), wrapping up a nearly six-month stint aboard the International Space Station for NASA astronaut Barry "Butch" Wilmore and cosmonauts Alexander Samokutyaev and Elena Serova. [Full Story: US-Russian Space Crew Returns to Earth After 167 Days in Orbit]

NASA's New Horizons spacecraft, which will zoom through the Pluto system on July 14, fired its engines for 93 seconds on Tuesday (March 10), when it was about 3 billion miles (4.83 billion kilometers) from Earth. No spacecraft had ever conducted an engine burn at so great a distance from its handlers, mission officials said. [Full Story: NASA Probe Makes Record-Setting Engine Burn on Path to Pluto]

A subsurface ocean on Ganymede

NASA's Opportunity Mars rover took a break in the home stretch of its Red Planet marathon to study some rocks the likes of which it's never seen before. As of March 5, the rover's odometer read 26.139 miles (42.067 kilometers), leaving it just 140 yards (128 meters) short of the marathon milestone. [Full Story: On Mars, Opportunity Rover Spots Weird Rocks Near Marathon Finish Line]

Aerospace firm Lockheed Martin has announced its plans for a new spaceflight system that could ferry cargo to the International Space Station, and also help get people to deep-space destinations such as the moon and Mars. [Full Story: Lockheed's 'Jupiter' Space Tug Could Fly to Space Station, Moon and Beyond]

What will NASA's Dawn probe look for at dwarf planet Ceres?