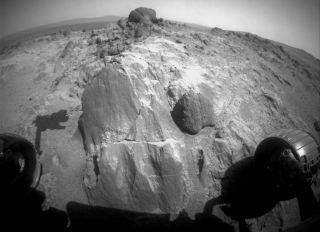 NASA's Mars rover Opportunity is taking a close look at the strange flat-faced rock near the center of this view, captured on March 3, 2015.
(Image: © NASA/JPL-Caltech)

NASA's Opportunity Mars rover is taking a break in the home stretch of its Red Planet marathon to study some rocks the likes of which it's never seen before.

The intriguing rocks lie atop a hill overlooking a site dubbed Marathon Valley — so named because Opportunity will have traveled the marathon distance of 26.2 miles (42.195 kilometers) on Mars by the time it gets there. As of Thursday (March 5), the rover's odometer read 26.139 miles (42.067 km), leaving it just 140 yards (128 meters) short of the milestone.

"We drove to the edge of a plateau to look down in the valley, and we found these big, dark-gray blocks along the ridgeline," Opportunity Project Scientist Matt Golombek, of NASA's Jet Propulsion Laboratory in Pasadena, California, said in a statement. "We checked one and found its composition is different from any ever measured before on Mars. So, whoa! Let's study these more before moving on." [Opportunity's Latest Mars Photos]

The examined rock is rich in silicon and aluminum, and its composition is different than anything observed by Opportunity or its twin, Spirit, on the Red Planet, NASA officials said.

Spirit and Opportunity landed a few weeks apart in January 2004 to search for signs of past water activity on Mars. The golf-cart-size rovers found plenty of such evidence, helping reshape researchers' understanding of the Red Planet and its history.

Spirit and Opportunity are also famed for their longevity. Their nominal missions were set at just three months, but Spirit kept exploring Mars until 2010. Opportunity, of course, is still chugging along today, though the rover is showing some signs of its advanced age.

Engineers have uploaded new flight software intended to fix the issue, but Opportunity's memory will have to be reformatted before the rover can resume using its flash memory.

Opportunity holds the record for greatest distance traveled on the surface of another world. Second place belongs to the Soviet Union's Lunokhod 2 lunar rover, which covered 24.2 miles (39 km) on the moon in 1973.