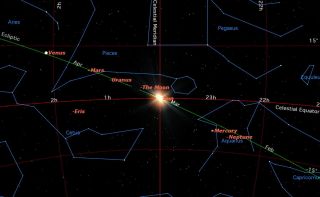 March should be a great month for spotting planets for skywatchers, weather permitting.

Venus is becoming increasingly more prominent in the evening sky, remaining above the horizon for 2.5 to 3 hours after the sun dips below the horizon. Meanwhile, Mars appears below Venus early in the month, but looks only a fraction as bright.

Jupiter is not quite as dazzling as Venus, but remains in the sky for practically the entire night and is a wonderful sight to behold through a telescope. Saturn, the spectacular ringed beauty, rises in the middle of the night and is well up in the southern sky as dawn begins to break. [Best Night Sky Events, March 2015 (Sky Maps)]

Check out some of the best planetary sights to behold in the evening, morning and night skies this March:

Uranus — If you never laid eyes on the planet Uranus, you're going to have to excellent chances this month thanks to its close proximity to two much brighter planets. Tonight (March 4), about 90 minutes after sunset, look low toward the western sky for dazzling Venus. Then train binoculars toward it and 0.3 degrees directly below, and you'll see a tiny blue-green "star," that's actually Uranus.

Mars — On March 11, Uranus will pass by Mars about one week after it moves by Venus in the night sky. About 90 minutes after sunset, look very low in the western sky. Orange-yellow Mars should be shinging about 10 degrees to the lower-right of Venus. (For reference, your clenched fist held at arm's length against the sky covers about 10-degrees.) As was the case last week, using binoculars, you'll find Uranus sitting 0.3 degrees below and a bit the left of Mars. Mars, of course, is nowhere near as dazzling as Venus, but still outshines Uranus by 5.5 magnitudes or 158-fold.

Saturn — The ringed wonder Saturn should shine near a waning gibbous moon the morning of March 12, but there will be ample opportunity to see the planet before the end of the month. Saturn rises around 1 a.m. local daylight time and comes up sooner each night through the month. By the end of March, the planet should be rising close to 11:30 p.m. The ringed planet shines brightly in Scorpius, about 8 degrees above the red star Antares.

Spring begins — On March 20 at 6:45 p.m. EDT (2245 GMT) the sun appears to cross the celestial equator moving north, marking the start of spring in the Northern Hemisphere and the beginning of fall in the Southern Hemisphere.

Mars and the moon — As darkness falls on March 21, look low toward the western sky for a razor-thin crescent moon. Mars will be sitting to the moon's upper right. The Red Planet is gradually dropping into the solar glare and by month's end, it will be setting around the time of the end of evening twilight.

Venus and the moon — Venus is finally getting high enough in the west to attract attention every clear evening after sunset.  A slender crescent moon will rise low and to the left of Venus on March 22. The bright planet is gaining prominence because it is wheeling around the sun toward Earth, catching up with us in its faster orbit. Through a telescope, Venus is growing a little larger and showing a more prominent gibbous phase.

Jupiter and the moon — The moon will rendezvous with Jupiter on March 29. As darkness falls look halfway up in the east-northeast for a waxing gibbous moon.  Shining brightly, about 6 degrees to its left, will be Jupiter.

Editor's note: If you take an amazing skywatching photo of a planet this month or any other night sky view you'd like to share for a possible story or image gallery, please contact managing editor Tariq Malik at spacephotos@space.com.