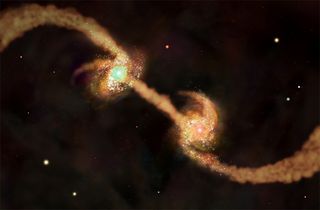 This illustration shows two spiral galaxies -- each with supermassive black holes at their center -- as they are about to collide and form an elliptical galaxy. New research shows that galaxies' dark matter halos influence these mergers and the resulting growth of supermassive b
(Image: © NASA/CXC/M.Weiss)

It has long been assumed that the size of a supermassive black hole in a galaxy's core is intimately related to the number of stars that galaxy contains — but it might not be that simple after all.

VIDEO: What if the Big Bang Never Happened?

Every galaxy is cocooned inside a massive halo of dark matter, the invisible stuff that is thought to account for nearly 85 percent of all matter in the universe. The bigger the galaxy, the bigger the dark matter halo. The stars that we observe in any given galaxy accounts for a tiny fraction of the total mass of that galaxy — the halo can extend for hundreds of thousands of light years from the visible galaxy's 'edge.'

The visible stars and gas in a galaxy can therefore be thought of as just the 'hub' of that galaxy; the rest of the 'wheel' extends far into intergalactic space, but as it is composed of dark matter, which does not interact with electromagnetic radiation (light), it cannot be seen. [Gallery: The Search for Dark Matter]

Although astronomers have known about these halos for some time, their gravitational impact on the visible stuff (stars, planets, gas) inside their host galaxies is poorly understood. And now dark matter's impact on black hole evolution is under scrutiny.

"There seems to be a mysterious link between the amount of dark matter a galaxy holds and the size of its central black hole, even though the two operate on vastly different scales," said lead author Akos Bogdan of the Harvard-Smithsonian Center for Astrophysics (CfA), Cambridge, Mass. Bogdan's work, co-authored with Andy Goulding (of Princeton University), has been accepted for publication in The Astrophysical Journal.

The majority of galaxies are thought to contain a supermassive black hole in their cores and, by studying over 3,000 elliptical galaxies, Bogdan and Goulding gauged the masses of their monster black holes by clocking the speeds of the stars whizzing around the central black holes.

As elliptical galaxies are products of galactic mergers — i.e. many galaxies clumping together over billions of years — the final elliptical is not only composed of many galaxies-worth of stars, but also a reservoir of all the dark matter those galaxies contained. Dark matter therefore has the dominant gravitational impact, dominating galactic evolution and guiding black hole growth.

"In effect, the act of merging creates a gravitational blueprint that the galaxy, the stars and the black hole will follow in order to build themselves," said Bogdan.