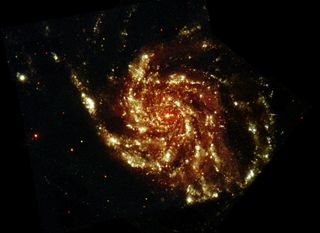 Messier 101, also known as the Pinwheel Galaxy, seen at ultraviolet and optical wavelengths, in an image taken by ESA's XMM-Newton space telescope. A new study looked at the Pinwheel Galaxy in hopes of finding evidence of dark matter interactions with light.
(Image: © ESA/XMM & R. Willatt)

Dark matter might not be totally dark: A new study reports that if dark matter has even a small interaction with particles of light, it could create a visible glow around galaxies.

Searching for light from the darkest substance in the universe may seem like an oxymoron, but scientists can't rule out the possibility that dark matter and light occasionally interact.

If particles of light can scatter off of dark matter, a new study suggests that this interaction could create "halos of light" around galaxies. The authors of the new work say there are telescopes in operation that could look for this dark matter glow. [Gallery: Dark Matter Throughout the Universe]

Looking for a dark matter glow

Roughly 80 percent of the matter in the universe is dark matter. While scientists cannot see dark matter, they know it exists in significant amounts because it exerts a gravitational pull on regular matter. Without dark matter, many galaxies would fly apart, unable to hold all the stars together while spinning at such high speeds.

Scientists have never directly observed dark matter — light appears to pass through it as if it weren't there at all. But it's possible that interactions between dark matter and light occur, but haven't been observed yet.

"The basic idea [of our work] is quite simple: can you say that dark matter is perfectly dark?" Jonathan Davis, a postdoctoral researcher at the Paris Institute of Astrophysics, said. "We want to put a number on how dark it is."

Davis is the lead author on a new paper that suggests that if starlight in galaxies occasionally scatters off dark matter, it would create a halo of light around the galaxy. This effect is the same for light scattering off of regular matter. Fog, for example, can turn a narrow beam of light into a diffuse glow.

"We know dark matter exists around galaxies and we want to ask — if light from the galaxy can scatter off the dark matter, like a dust cloud, can you actually observe this light?" Davis said.

Davis and his co-author, Joseph Silk, an astrophysicist at Johns Hopkins University, went looking for this kind of glow around the galaxy Messier 101, also known as the Pinwheel Galaxy, using data from the Dragonfly Telephoto Array.

"These telescopes were designed to look for diffuse light around galaxies. Not in the context of dark matter, but you can repurpose the data to look for this glow," Davis said. "[The Dragonfly telescopes] are really good at looking for this high contrast between the really bright galactic center and the really dim outskirts of galaxies."

The hunt came up empty — there was no halo in this particular wavelength. But Davis said he hopes the results inspire someone to make a more dedicated search for one of these halos. [8 Baffling Astronomy Mysteries]

Particles called neutrinos, for example, shower down on the Earth every second of every day, but for the most part they pass through matter like ghosts. But every once in a while, a neutrino will collide with an atom of regular matter. It's possible that dark matter particles have a similarly low, but not nonexistent, interaction rate with light.

If dark matter interacts with photons and other particles, those interactions could scatter the dark matter. This, in turn, could wipe out structures that trap gas and eventually form galaxies, according to a news release from the Royal Astronomical Society. In September, Boehm co-authored a paper suggesting that dark matter and photon interactions might explain why there are not as many galaxies orbiting the Milky Way, as some scientists expect.

Boehm said in an email to Space.com that she feels the merit of the new work by Davis and Silk lies in the idea of using halos to constrain dark matter interactions with light.

Looking forward, Davis said he hopes the publication of the new work draws attention from other scientists who might like to join the search for light from the darkest substance in the universe.