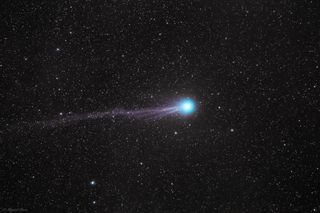 Astrophotographer Miguel Claro took the image as a well as a timelapse video from Juromenha, Dark Sky Alqueva Reserve, Portugal on Jan. 11, 2015.

"After a few seconds we will zoom in, entering in a real time lapse sequence capturing the slowly movement of the comet and their ion blue tail, made by ionized gas – gas energized by ultraviolet light from the Sun and pushed outward by the solar wind – while it is crossing some stars of Taurus constellation," Claro wrote about the timelapse video, which resulted in the final still images in an email to Space.com. [See more amazing photos of Comet Lovejoy]

The newly discovered comet, officially known as Comet Lovejoy C/2014 Q2, was first spotted by Australian amateur astronomer Terry Lovejoy last August. The apparent green color of the comet likely comes from cyanogen, a poisonous gas that glows green when sunlight hits it. The comet was visible through much of January, but it reached its brightest early this year with a magnitude of 4.6. On this scale, smaller numbers represent brightness of objects in space. The dimmest objects visible to the human eye are about magnitude 6.5.