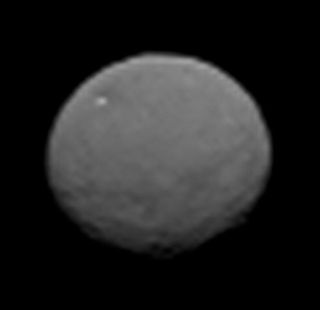 The new images of Ceres were taken at a distance of 147,000 miles (237,000 kilometers) on Jan. 25 by NASA's Dawn space probe. The images hint at the presence of craters and other surface features that telescopes have never been able to resolve on Ceres before. However, scientists said the images have not yet revealed the nature of Ceres' mysterious white spot.

"We are already seeing areas and details on Ceres popping out that had not been seen before. For instance, there are several dark features in the southern hemisphere that might be craters within a region that is darker overall," Carol Raymond, deputy principal investigator of the Dawn mission at JPL, said in a statement. "Ceres is showing us tantalizing features that are whetting our appetite for the detailed exploration to come." [Dwarf Planet or Asteroid? Amazing Photos of Ceres]

The Dawn spacecraft is rapidly approaching Ceres and is set to begin orbiting it on March 6. This close location will allow Dawn to study the mysterious body in greater detail. Dawn's proximity to Ceres is giving it a uniquely sharp view of the dwarf planet: Dawn's images of Ceres are now a 30 percent higher resolution than those taken by the Hubble Space Telescope.

Scientists are already anticipating finding many fascinating features on Ceres. It is possible, according to NASA's statement, that there is liquid water beneath the surface of Ceres, and that it once harbored an entire subsurface ocean. Scientists have already observed plumes of water vapor erupting off the surface of the space rock, and these could be coming from ice volcanoes.

There is also the mysterious white spot on Ceres, which can be seen in the upper left quadrant of the new photos. The scientists say they can confirm that something on the surface of Ceres is reflecting sunlight, but they cannot yet say what.

On Jan. 13, Dawn also captured an image of Ceres in infrared light, which offers a look at the temperature of the planet. NASA scientists have not yet said what can be learned from this image.

Launched in 2007, the Dawn probe has also visited the asteroid Vesta, the second-largest object in the asteroid belt between Mars and Jupiter. Studying objects like Vesta and Ceres can help scientists answer questions about how planets, moons and other objects in our solar system formed.