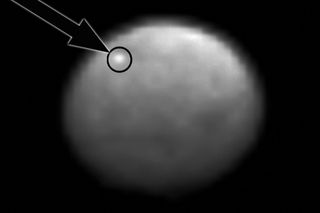 A mysterious white spot can be seen in the newest images from NASA's Dawn space telescope, which is rapidly approaching the dwarf planet.
(Image: © NASA/JPL-Caltech/UCLA/MPS/DLR/IDA/PSI)

A strange, flickering white blotch found on the dwarf planet Ceres by a NASA spacecraft has scientists scratching their heads.

The white spot on Ceres in a series of new photos taken on Jan. 13 by NASA's Dawn spacecraft, which is rapidly approaching the round dwarf planet in the asteroid belt between the orbits of Mars and Jupiter. But when the initial photo release on Monday (Jan. 19), the Dawn scientists gave no indication of what the white dot might be.

"Yes, we can confirm that it is something on Ceres that reflects more sunlight, but what that is remains a mystery," Marc Rayman, mission director and chief engineer for the Dawn mission, told Space.com in an email. [Photos of Dwarf Planet Ceres]

The new images show areas of light and dark on the face of Ceres, which indicate surface features like craters. But at the moment, none of the specific features can be resolved, including the white spot.

"We do not know what the white spot is, but it's certainly intriguing," Rayman said. "In fact, it makes you want to send a spacecraft there to find out, and of course that is exactly what we are doing! So as Dawn brings Ceres into sharper focus, we will be able to see with exquisite detail what [the white spot] is."

The $466 million Dawn spacecraft is set to enter into orbit around Ceres on March 6. Dawn left Earth in 2007 and in the summer of 2011, it made a year-long pit stop at the asteroid Vesta, the second largest object in the asteroid belt.

While Vesta shared many properties with our solar system's inner planets, scientists with the Dawn mission suspect that Ceres has more in common with the outer most planets. 25 percent of Ceres' mass is thought to be composed of water, which would mean the space rock contains even more fresh water than Earth. Scientists have observed water vapor plumes erupting off the surface of Ceres, which may erupt from volcano-like ice geysers.

The mysterious white spot captured by the Dawn probe is one more curious feature of this already intriguing object.