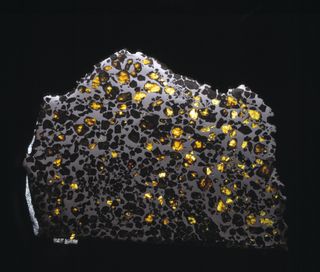 An image of the Esquel meteorite, a pallasite that consists of gem-quality cystals embedded in metal.
(Image: © Natural History Museum, London)

The magnetic fields of planetary building blocks lasted for a surprisingly long time in the solar system's early days, a new study suggests.

The magnetic fields of these big asteroids were apparently generated by the same process that drives Earth's global magnetic activity, and could have persisted for hundreds of millions of years after the objects' formation, researchers said.

The study team analyzed pallasites, iron-and-nickel meteorites believed to originate from an ancient rocky body about 250 miles (400 kilometers) wide. The pallasites contain tiny particles of ‪tetrataenite — a mineral that records a magnetic history of the parent body going back billions of years. [Our Solar System: A Photo Tour of the Planets]

The researchers probed this history using an X-ray electron microscope at the BESSY II synchrotron in Berlin, capturing the moment when the big asteroid's global magnetic field died.

‪"We're taking ancient magnetic field measurements in nanoscale materials to the highest-ever resolution in order to piece together the magnetic history of asteroids," study lead author James Bryson, a Ph.D. student at Cambridge University in England, said in a statement. "It's like a cosmic archaeological mission."

The pallasites' parent body was one of many relatively large, rocky objects that formed in the first few million years of solar system history. Radioactive decay heated up the interiors of these planetary building blocks, which segregated into molten metal cores surrounded by rocky mantles.

Scientists had thought that the global magnetic fields of these big asteroids were probably created by the circulation of heat energy within the core. This process would likely have petered out relatively quickly, after a few tens of millions of years at most, researchers said.

But the new X-ray observations, along with computer simulations performed by the study team, paint a different picture: The pallasite parent body's magnetic field lasted for a long time — perhaps several hundred million years. Furthermore, this field was probably generated by the progressive solidification of the core — a phenomenon known as "compositional convection," rather than thermal convection as previously presumed, researchers said. (When the core solidified completely, the magnetic field died.)

‪"It's funny that we study other bodies in order to learn more about the Earth," Bryson said. "Since asteroids are much smaller than the Earth, they cooled much more quickly, so these processes occur on shorter timescales, enabling us to study the whole process of core solidification."

The new study has applications to other rocky bodies in the solar system as well, study team members said.

"These conclusions imply that a second epoch of dynamo activity [after thermal-convection-driven dynamos] across a potentially large fraction of small bodies occurred in the early solar system, and help to explain the long-lived magnetic activity observed for other bodies, such as the moon," they wrote in the new study, which was published online today (Jan. 21) in the journal Nature.