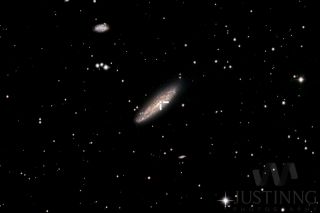 This stunning image shows a bright supernova in the Superwind galaxy taken on Jan. 2 by a night sky photographer in Singapore.

"This Type la supernova is located in the spiral galaxy, Superwind galaxy, in Virgo that is approximately 80 million light-years away from Earth," Ng wrote in an email to Space.com, adding the image is the result of a 2-hour exposure. Type Ia supernovas are generally thought to originate from white dwarf stars in a close binary system.

According to Ng, supernova ASASSN-14lp has been getting brighter since it's discovery and became the second brightest supernova of the year 2014 with an 11th magnitude on the reverse scale used by astronomers to measure the brightness of objects in space. On this scale, smaller numbers represent brighter objects. The dimmest objects visible to the human eye are about magnitude 6.5. [Supernova Photos: How Stars Die]

The Superwind galaxy NGC 4666 is a starburst galaxy where intense star formation is taking place. A combination of strong winds from massive stars and supernova explosions create a continuous flow of gas from the galaxy.