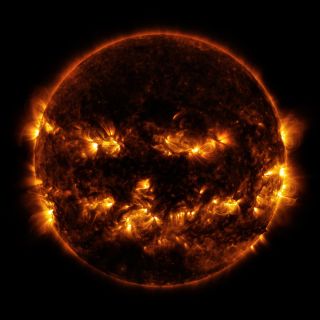 Scientists at Sandia National Laboratory have recreated conditions inside the sun in an attempt to crack the mysteries of Earth's nearest star.
(Image: © NASA/SDO)

A machine on Earth capable of recreating the conditions inside the sun's heart is helping scientists study how iron behaves at mind-boggling temperatures. The results of the experiment, so far, have defied expectations and just might help settle a long-standing solar puzzle, researchers say.

Recreating conditions inside the sun, with temperatures topping 3.9 billion degrees Fahrenheit (2.2 billion degrees Celsius), is no easy task, but it's something scientists have been doing for a decade at the Z Machine at Sandia National Laboratory. This machine creates some of the most powerful X-rays found on Earth.

Each pulse contains 80 trillion watts of electricity — more than five times the combined electrical power of all the power plants on Earth, according to Sandia's website. The pulses last only about 100 nanoseconds each, but that's long enough to heat a very small sample of material to temperatures found at the heart of Earth's nearest star. [Solar Quiz: Do You Know Our Sun?]

"In high-energy-density physics, creating a temperature of 2 million degrees is not that uncommon," John Bailey, a researcher at Sandia National Laboratory and a co-author on the new research, told Space.com. The Z Machine pulses are so powerful that Bailey said they completely vaporize the metal in the central part of their apparatus. "What's difficult, though, is creating those conditions in a sample that's big enough and long enough lived that you can accurately measure properties."

In the scientists' most recent work, Bailey and his colleagues used the X-ray pulses to deliver a powerful jolt of energy to a small sample of iron, which then turns into an incredibly hot plasma, just like iron inside the sun. Bailey and his colleagues came up with a way to measure how much radiation the iron sample absorbs, a property called opacity. They found that iron's opacity in these conditions is 7 percent higher than expected.

This finding may affect the study of the sun and other stars. Around 2001, a group of researchers found observational evidence suggesting that there is 30 percent to 50 percent less oxygen, carbon and nitrogen in the sun than models had previously predicted and observations had previously seemed to show (discussion continues among scientists about which interpretation is correct). When those reduced numbers were incorporated into solar models, the results conflicted with observational data about the internal structure of the sun (deduced by studying sound waves that travel through the star). Scientists wondered if the observations were incorrect, or if an entirely new stellar model was needed.

The findings by Bailey and his colleagues could help resolve this apparent conflict.

The observations from 2001 were interpreted based on predicted values for the opacity of oxygen, carbon and iron at temperatures found inside the sun — but those values had never been measured in a lab (as noted above, such observations are extremely difficult). If the opacity of all three materials differs from the previously predicted values, that could change how the observational evidence would be interpreted. This means the amount of oxygen, carbon and iron inside the sun might not have to be adjusted after all, and the models may still be correct.

For the moment, Bailey said he and his group are focused on understanding why previous models predicted a lower opacity for iron at high temperatures. The researchers will perform similar tests on nickel and chromium, elements that are chemically similar to iron. Many groups of researchers use the Z Machine for experiments, so time is limited for Bailey and his team. For their study on iron, he said he only got "about 10 shots a year."

"It's true that we wish we could go faster, but at least we have the chance to do something that people have realized should be done for a century," Bailey said. "We're recreating a speck of solar matter in our laboratory. Having the opportunity to do that is really unprecedented."

The results of the new study were published in a recent edition of the journal Nature.