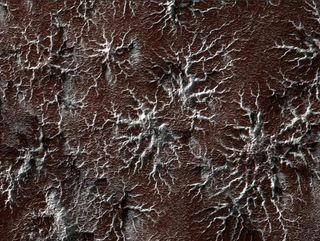 The Martian surface is covered with a diverse array of landscapes and features, but this is one of the weirdest.

Imaged by the High-Resolution Imaging Science Experiment (HiRISE) camera on board NASA's Mars Reconnaissance Orbiter (MRO) that orbits the planet 150 miles overhead, strange spider-like formations cover this south polar region of Mars. And these are truly alien features that are found nowhere on Earth.

PHOTOS: The Psychedelic Landscape of Mars

So what are they? Is Mars infested with arachnids? Or is it some sort of giant mold? Sadly, it's neither, it's actually a fascinating season-driven phenomena that HiRISE scientists call "araneiform" terrain.

Araneiform means, perhaps unsurprisingly, "spider-like" and the term applies to other features that have a "spider", "caterpillar" or "starburst"-like shape, according to planetary scientist Candice Hansen who described the same south pole region in an earlier HiRISE image release.

Carbon dioxide ice on Mars does not melt into a liquid state; it bypasses the liquid phase and sublimates straight from a solid into a vapor. This seasonal process therefore creates its own type of erosion on the Martian landscape.

"This particular example shows eroded channels filled with bright ice, in contrast to the muted red of the underlying ground," writes Hansen. "In the summer the ice will disappear into the atmosphere, and we will see just the channels of ghostly spiders carved in the surface." [Amazing Mars Photos by MRO]

Earth's atmospheric temperature does not drop as low as Mars', so carbon dioxide ice (or "dry ice") does not form naturally. Therefore, there is no terrestrial analog of these alien spider channels — it is purely a Mars phenomenon.

"This is truly Martian terrain — this type of erosion does not take place anywhere naturally on earth because our climate is too warm," adds Hansen.

Planetary scientists are therefore very interested in understanding these kinds of erosional processes; they provide us with a very privileged view into the changing seasons on the Red Planet and how very different erosional processes on an alien world continue to shape the dynamic Martian terrain.

Special thanks to @HiRISE