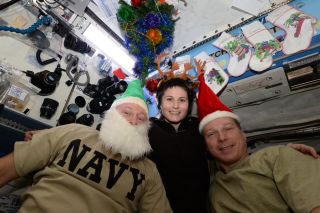 Astronauts in space have decked the halls of the International Space Station in honor of the holiday season.

The international crewmembers on the station have hung stockings, pulled out the orbiting outpost's Christmas tree, and they generally seem to be getting into the Christmas spirit before the holiday tomorrow. European Space Agency astronaut Samantha Cristoforetti even sent out a picture of her with NASA astronauts Terry Virts and Barry "Butch" Wilmore with their decorations on the station.

"It's beginning to look like Christmas on the International Space Station," NASA officials wrote on a blog about the holiday. "The stockings are out, the tree is up and the station residents continue advanced space research to benefit life on Earth and in space."

Although NASA astronauts usually get the day off for Christmas, they have still been taking part in a variety of experiments leading up to the holiday. On Dec. 23, for example, the crewmembers participated in a neurology experiment to monitor how motor control, perception and other aspects of brain function change over time in space, according to NASA. In addition to Wilmore, Virts and Cristoforetti, the station's cre includes Russian cosmonauts Elena Serova, Alexander Samokutyaev and Anton Shkaplerov.

People on Earth can also send holiday messages of cheer to astronauts in space this season. NASA has set up a special portal for Earthlings that want to send their greetings to Virts and Wilmore on the station.

Virts and Wilmore have already sent down their holiday message to Earth in the form of a special Christmas video released by NASA this week.

"This is definitely going to be a Christmas that we'll remember, getting a chance to the beautiful Earth," Virts said in the video. "And I hope that for you, also, it'll be a memorable Christmas this year. Have fun with your family, enjoy the day, and merry Christmas."

People on the planet can also send special space-themed holiday e-cards to their loved ones via the European Space Agency.