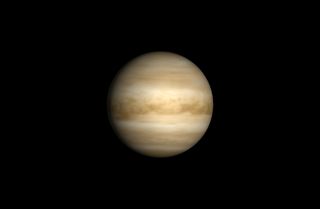 Venus is among a number of bright planets that skywatchers can see in December's night sky.
(Image: © Starry Night software)

With luck, skywatchers can catch sight of the five brightest planets in the sky this month.

The smallest and innermost of the planets, Mercury, will be overwhelmed by the dazzling glare of the sun for much of December, but by New Year's Eve, it will have edged far enough away from the sun's vicinity to be glimpsed low in the west-southwest sky right after sundown.

Also slowly becoming more evident in the evening sky this month is the dazzling planet Venus; in fact, you can use it to point the way to Mercury by month's end. On Dec. 22, Venus will be joined by an exceedingly thin crescent moon. Also in the western evening sky is Mars, now a full eight months past its brilliant apparition of last spring and continuing to fade as it pulls away from Earth. [Best Night Sky Events of December 2014 (Sky Maps)]

Jupiter is now a brilliant fixture in the late evening and overnight hours, hovering not far from the sickle of Leo, while the ringed wonder, Saturn, begins to slowly lift higher in the east-southeast predawn sky.

Here's a schedule that provides some of the best planet-viewing times this month and tells skywatchers where in the sky to look. (Remember that when measuring the angular separation between two celestial objects, your clenched fist held at arm's length measures roughly 10 degrees.)

Dec. 8: Mercury passes superior conjunction today, when the planet is on the opposite side of the sun from Earth. As this event coincides with the date of Mercury's aphelion — its farthest point from the sun — the planet withdraws only very slowly to the east of the sun.

Dec. 11: Looking low toward the east-northeast horizon around 10 p.m. local time, you'll see the waning gibbous moon, accompanied about 6 degrees to its upper left by the brilliant planet Jupiter shining at a dazzling magnitude of minus 2.3 — more than twice as luminous as Sirius, the brightest star in the sky.

Dec. 19: If you look very low toward the east-southeast horizon at around 5:30 a.m. local time, you'll see a delicately thin waning crescent moon. Sitting about 5 degrees below and to its left will be a bright yellow-white "star" shining with a sedate glow. That will be Saturn.

Dec. 22: Venus returns to its role of "evening star" this month. When December begins, this planet is just 5 degrees high in the southwest at sundown (as seen from about 40 degrees north latitude) and touches the horizon just over half an hour later.

This evening, this magnitude minus 3.9 world is 9 degrees high at sunset and remains up for another hour. Look for it about half an hour after sunset low to the southwest horizon; if you spot it, look about 7 degrees to its right for a breathtakingly thin waxing crescent moon less than one day from new phase.  Binoculars will help.

Dec. 24: If you look southwest at dusk on Christmas Eve, you'll see a crescent moon, and about 7 degrees to its left, shining with a yellow-orange hue, will be Mars. The Red Planet has now receded to a distance of 180 million miles (290 million kilometers) from Earth.

Dec. 31: Mercury is still setting in the middle of evening twilight. Using binoculars, search for it within half an hour of sunset, about 4 degrees to the lower right of the much brighter Venus. These two planets will put on a great evening show during the first three weeks of January.