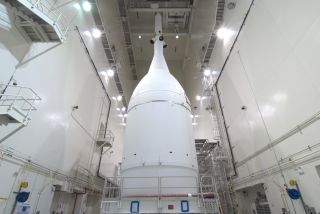 NASA's Orion spacecraft, shown here encapsulated in its fairing, is ready for its Nov. 11, 2014 move from the agency's Kennedy Space Center in Florida to Space Launch Complex 37 at the next-door Cape Canaveral Air Force Station. Orion is slated to launch on its first test mission on Dec. 4, 2014.
(Image: © NASA/Jim Grossman)

NASA's next spaceship is about to take a big step toward its historic December spaceflight debut.

The Orion capsule will roll out to the launch pad Tuesday night (Nov. 11), moving from the Launch Abort System Facility at NASA's Kennedy Space Center (KSC) in Florida to the next-door Cape Canaveral Air Force Station. Orion will launch on an unmanned test mission from the Cape on Dec. 4 to test out a variety of its systems, including the capsule's heat shield and other re-entry technologies.

The move was originally scheduled for Monday (Nov. 10), but a weather forecast predicting strong winds and lightning pushed things back 24 hours. If all goes according to plan, Orion will start moving Tuesday at 8 p.m. EST (0100 GMT Nov. 12) and wrap up about 6 hours later when the capsule, encased in its 52-foot-tall (16 meters) protective fairing, arrives at Space Launch Complex 37B. [The Orion Capsule: NASA's Next Spaceship (Photos)]

Orion is designed to carry astronauts to deep-space destinations such as asteroids and Mars. On Dec. 4, engineers will get their first look at how the capsule performs away from Earth.

During the mission, known as Exploration Flight Test-1 (EFT-1), Orion will fly about 3,600 miles (5,800 kilometers) from the planet, then come rocketing back at high speeds.

"We're going to test really, I would say, the riskiest parts on a mission in ascent and entry — things like the fairing separations, heat shield, parachutes, entry navigation and guidance, those kinds of things," Orion Program Manager Mark Geyer said during a news briefing Monday. "We'll test all those on this flight, as well as flying into deep space and examining the radiation effects on the avionics."

EFT-1 will mark the farthest a NASA human-spaceflight vehicle has flown since the last Apollo moon mission came back to Earth in late 1972.

Orion will launch atop a United Launch Alliance Delta 4 Heavy rocket on Dec. 4. However, the capsule's crewed missions will use NASA's Space Launch System megarocket, which is currently in development. SLS and Orion are scheduled to fly together for the first time in 2017 or 2018; their first crewed mission is pegged for 2021.

NASA envisions Orion taking astronauts out to visit a captured asteroid in lunar orbit by 2025, then getting crews to the vicinity of Mars by the mid-2030s. This ambitious, multistep trek will get off the ground with EFT-1 on Dec. 4, NASA officials say.

"This is special," said KSC Director Bob Cabana. "This is our first step on that journey to Mars."