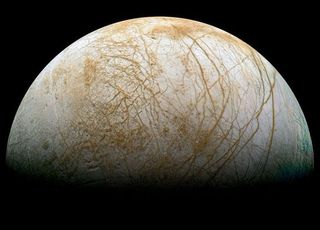 Scientists who want to explore Jupiter's ocean-harboring moon Europa have some allies in high places.

Several influential congresspeople are among those calling for a mission to Europa, which is regarded by many scientists as the best place to search for life beyond Earth.

"We don't need to wait to go find life in another solar system," Rep. John Culberson, R-Texas, said in July. "It's right here in our own backyard." [6 Most Likely Places for Alien Life in the Solar System]

'Defining moment in our lifetime'

Culberson spoke at "The Lure of Europa," a public meeting organized in Washington, D.C., by nonprofit group The Planetary Society.

His words came just one day after NASA scientist Kevin Hand stated at a public NASA forum that he thought humans would find life in the universe in the next two decades, and on the same day that NASA released its call for scientific instruments for a planned Europa mission.

Rep. Lamar Smith, R-Texas, chairman of the House of Representatives' Science, Space and Technology Committee, kicked things off at "The Lure of Europa" by wishing the world could see how excited attendees were about the Jupiter moon. Some members of the audience remained standing, while others sat on the floor.

"There is a general apparent interest in the subject of space in the American people," Smith said.

"Just the mere idea of the forms of those lives is enough to keep us exploring for several years," Smith said. [5 Bold Claims of Alien Life]

Culberson called the future discovery of extraterrestrial life "the defining moment in our lifetime." "It will define our civilization," he said.

Europa is a particularly good place to hunt for potential alien life, Culberson added. Scientists think that, beneath its icy crust, Europa contains three to four times more water than Earth does, and that its seafloor may be heated by geologic activity. Radiation from Jupiter helps produce some of the chemicals required for life on the moon's surface.

Recently, scientists discovered geysers in Europa's southern hemisphere — a finding that could potentially allow for the exploration of the underground ocean without the need to pierce the icy crust.

In 2013, the U.S. National Research Council's Planetary Science Decadal Review issued its 10-year recommendation for planetary exploration for NASA and the National Science Foundation. The report ranked an exploration of Europa as the highest-priority mission. Past budget cuts had endangered funding for studying the Jovian moon — a problem that the representatives hope to rectify in the future.

"It's our job to make sure there's enough funding to fund these exciting missions," Culberson said, referring to his role as a member of the House Committee on Appropriations.

Rep. Adam Schiff, D-Calif., who is also on the House Committee on Appropriations, spoke at the "Lure of Europa" event as well.

Schiff's district is home to the Jet Propulsion Laboratory (JPL), the lead NASA center for building and operating robotic planetary explorers, including the Mars rover Curiosity.

Congress allocated NASA $155 million over the last two years to study a possible mission to Europa, and the White House allocated $15 million toward this end in its 2015 federal budget request. NASA officials say they hope to launch a roughly $1 billion Europa mission in the mid-2020s or so.

NASA's current plans consist of launching a probe that will do multiple flybys, as there is not yet enough data to select a safe landing site on the moon. This initial mission could help pave the way to put a probe down on Europa someday, NASA officials say.

"We have a lot more challenges on the way to Europa, both here and in space," Schiff warned.

But overcoming those challenges could result in exciting discoveries, he added.

"I don't know what we'll find there, but I know it will be amazing," Schiff said of Europa.

Culberson added that the taxpayers who fund the exploration of Europa will play a role in the results — a responsibility that will be especially important if scientists find life on Europa.

"[Imagine if] we had some role, some part to play in finding life on another world and changing mankind for the better," Culberson said. "What better legacy could we possibly leave?"