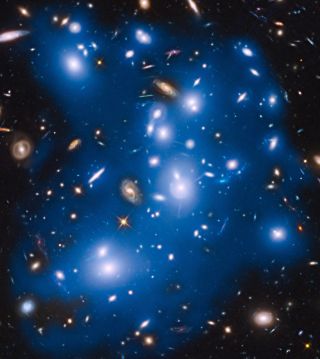 The Hubble Space Telescope captured this image of what scientists described as the "ghost light" of long-dead stars in Pandora's Cluster, a group of galaxies known officially as Abell 2744. This image was released on Oct. 30, 2014.
(Image: © NASA/ESA/IAC/HFF Team, STScI)

NASA is adding a cosmic twist to Halloween with an unexpected find by the Hubble Space Telescope: eerie "ghost light" from the remains of a multi-galaxy massacre.

As many as six galaxies roughly the size of our own Milky Way met their grisly deaths at the hands of gravity. The celestial bloodbath occurred over a period of 6 billion years in a group of galaxies 4 billion light-years away. NASA unveiled Hubble's false-color view of the "ghost light" Thursday (Oct. 30), just in time for Halloween.

Stars from those galaxies, now ripped from their cosmic homes, were seen emitting a "faint, ghostly glow" by the Hubble Space Telescope. In an ominous coincidence, the region in question — officially known as Abell 2744 — is nicknamed "Pandora's Cluster." [The Spookiest Space Photos of All Time]

"The Hubble data revealing the ghost light are important steps forward in understanding the evolution of galaxy clusters," Ignacio Trujillo of The Instituto de Astrofísica de Canarias (IAC), Santa Cruz de Tenerife, Spain, said in the NASA statement. "It is also amazingly beautiful in that we found the telltale glow by utilizing Hubble's unique capabilities."

The stars were found wandering region of space where their parent galaxies were once "pulled apart like taffy," NASA officials wrote in the statement. The researchers who discovered the eerie light are confident that studying these stars can provide information about what happened in side the cluster.

The researchers who discovered the ghostly glow don't appear to be frightened by their discovery.

"The results are in good agreement with what has been predicted to happen inside massive galaxy clusters," said Mireia Montes, the study's lead author who is also with the IAC, in the statement.

The ghostly results were published in the Oct. 1 issue of the Astrophysical Journal.

Email Calla Cofield at ccofield@space.com or follow him @callacofield.Follow us @Spacedotcom, Facebook and Google+. Original article on Space.com.