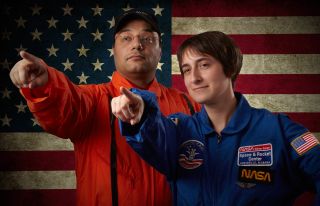 It's no secret that at Space.com, we love everything space. And if you have a killer space-themed Halloween costume, we would love to see it.

So what's your best space costume? A walking rocket? A spooky white dwarf star? How about an alien, or maybe something more science-y like a real-life alien planet or black hole? If you've got such a costume hanging in your closet, please let us know, take some pics and send them along to managing editor Tariq Malik and the Space.com team at spacephotos@space.com.

We're taking entries through the Halloween weekend in the following categories:

Space Travelers: Are you a spooky astronaut, or dressed as an icon of space history? If so, then this category is for you.

Objects in Space: Not everyone wants to dress up like an astronaut. Some folks like to dress up like spaceships, satellites or even planets and comets themselves! If you've got a cosmic costume like that, this category is in your orbit.

Sci-Fi Duds: Space costumes don't necessarily need to be based on reality. I mean who doesn't want to be Captain James T. Kirk from "Star Trek," or maybe a a Leela from "Futurama." We want to know.

We'll make a gallery out of the photos we get, and the most inspired costumes may even win their brave wearers a signed copy of Canadian astronaut Chris Hadfield's awesome book "An Astronaut's Guide to Life on Earth." The winners will be selected on Monday, Nov. 3.

Indeed, dressing up as Olympus Mons or Ham the Space Chimp can have material as well as psychological benefits. For example, on Halloween (Oct. 31), anyone who shows up in a space-themed Halloween costume will get into New York City's Intrepid Sea, Air & Space Museum for free. (One adult ticket normally costs $24.) You can find out more here: www.intrepidmuseum.org.

The Intrepid houses NASA's first space shuttle, Enterprise, which never reached space but performed a  number of test flights in Earth's atmosphere in the late 1970s.

If you do send a photo in to Space.com, please be sure to explain what you're supposed to be (it's a big, mysterious universe, and some cosmic phenomena are hard to identify), how you came up with the idea and how you constructed the costume.

If you need a little inspiration, check out the photo above of Tariq Malik and Space.com writer Miriam Kramer dressed as steely-eyed astronauts; I believe they're pointing toward two people in the distance who are sporting somewhat more creative costumes.