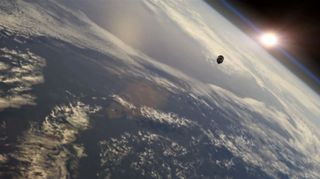 NASA's Orion spacecraft is scheduled to launch on its first unmanned test flight on Dec. 4, 2014. This screengrab from a new NASA video shows an artist's concept of Orion streaking around Earth during the mission, which is known as EFT-1.
(Image: © NASA)

NASA's newest crewed spaceship will launch in December on a first-ever test flight that will take it thousands of miles away from Earth and through temperatures twice that of molten lava.

The unmanned mission, known as Exploration Flight Test-1 (EFT-1), is designed to test out NASA's Orion spacecraft ahead of future crewed missions to far-flung destinations such as asteroids and Mars. And a new NASA video about EFT-1 takes viewers through the highly anticipated first flight, step by step.

If all goes according to plan, Orion will launch atop a Delta IV Heavy rocket from Florida's Cape Canaveral Air Force Station on Dec. 4. The capsule will jettison from the rocket and take a lap around Earth about 100 miles (160 kilometers) above the surface, hurtling along at 17,000 mph (27,360 km/h). Then, it will prepare to break away from Earth's orbit. [Photos: NASA's Orion Space Capsule Test Flight]

"Like the setup for a roller-coaster ride, this is the big climb we've been waiting for," NASA engineer Kelly Smith said in the video.

Once it breaks away from Earth, the Orion capsule will pass through the Van Allen Belts, huge swaths of radiation that could wreak havoc on a spacecraft's electronic equipment. The data Orion collects when passing through the belts will help engineers design shielding that can safeguard the craft during future human missions, Smith said.

On the trip back to Earth, Orion will separate from the Delta IV's upper stage and orient itself for atmospheric re-entry.

"No matter what happens now, we're coming in," Smith said.

During its descent, the Orion capsule will hurtle toward Earth so fast that the air particles it pushes out of its way will heat up, generating a balloon of hot plasma around the spaceship. Orion has the largest heat shield ever built for a spacecraft to handle the searing temperatures, which will reach 4,000 degrees Fahrenheit (2,204 degrees Celsius).

This is one of the most dangerous parts of the flight, Smith said, especially since mission control will briefly lose contact with Orion when the plasma envelope blocks communication signals.

"And then, splashdown," Smith said.

At the end of EFT-1, Orion will land in the Pacific Ocean, and NASA engineers will then sort through all the data from the flight to continue getting Orion on track to eventually start flying humans into space.