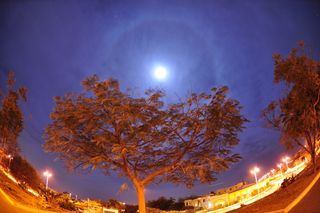 Mars and the moon shine in this photo taken in 2012 by Roberto Porto above Tenerife, off the northwest coast of Africa).
(Image: © Roberto Porto)

The moon and Mars will create a pretty tableau along the southwest horizon at dusk tonight and tomorrow.

Tonight (Oct. 27), if weather permits, skywatchers should see the moon far to the right of the Red Planet, which will glow with a bright yellow-orange hue. Tomorrow (Oct. 28), the moon will be slightly more illuminated and hovering high above and slightly to Mars' left.

If you are trying to see the celestial tableau from the northern latitudes, at mid-twilight (about 45 minutes after sunset), Mars will be about 17 degrees up in the southwest setting about two hours later. Your clenched fist is roughly equal to 10 degrees when held at arm's length, so Mars will appear nearly "two fists up" from the horizon. [Best Skywatching Events of October 2014: Sky Maps (Gallery)]

Mars is dimmer these days as it continues to recede from Earth, but the Red Planet is also the only first-magnitude object glimmering into view low in the southwest at dusk. The planet is still bright enough to stand out prominently among the faint star fields in eastern Sagittarius. In fact, on the evening of Nov. 3, Mars will glide just 0.7 degree to the upper right of the third-magnitude star Kaus Borealis, also known as Lambda Sagittarii, which marks the top of the Sagittarius teapot.

At the moment, Mars has retreated to a distance of 155 million miles (249 million kilometers) from Earth and shines with only one-ninth of the brightness compared to last April.

If you own a telescope, even a moderately large one, don't bother training it on Mars. Its disk has now shrunk to less than 6 arc seconds in diameter; you would need a magnification of 320-power to enlarge it to the apparent size of the moon as seen with the naked eye. A 12-inch or larger telescope would be needed to properly do the job. In smaller instruments, Mars will appear no better than a circular dot of light.

Because the moon is so much nearer to Earth than Mars — about 233,000 miles (375,000 km) away — it moves much more rapidly against the background stars than the Red Planet. The moon will pass to the north of Mars during Tuesday morning, the two being rather widely separated by about 7 degrees. Both will also be below the horizon from North America. On Monday evening, the moon will be approaching Mars, but just 24 hours later, it will be leaving Mars behind.

Mars and the moon's meet-up isn't the only celestial sight to behold today. People along the East Coast of the United States should be able to see the private spaceflight company Orbital Sciences Corp.'s Antares rocket launch an unmanned resupply spacecraft to the International Space Station, if weather permits. Find out if you'll be able to see the launch using this rocket-launch skywatching guide.

Editor's Note: If you snap an amazing image of Mars and the moon or any other skywatching sight that you'd like to share for a possible story or image gallery, please contact managing editor Tariq Malik at spacephotos@space.com.