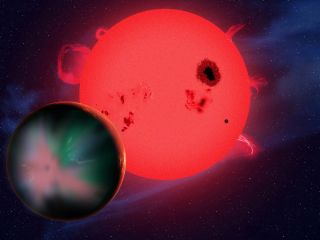 Artist's concept of an alien planet orbiting a red dwarf star. Could severe space-weather events doom the chances for life on such worlds?
(Image: © David A. Aguilar (CfA))

Small, dim red dwarfs are by far the most common stars in the Milky Way, making up more than 70 percent of our galaxy's stellar population. But are they best places to look for alien life?

That question will take center stage during a debate tonight (Oct. 16) at 7:30 p.m. EDT (2330 GMT) organized by the Harvard-Smithsonian Center for Astrophysics (CfA). You can watch the event live here on Space.com, courtesy of the CfA, or on the CfA's "Observatory Nights" YouTube channel: http://www.youtube.com/user/ObsNights

"Ofer Cohen will discuss the latest research suggesting that harsh winds and stellar radiation would scour any planets in the habitable zone. Elisabeth Newton will argue that red dwarf worlds could be more resilient than we think."

Astronomers have discovered nearly 2,000 alien planets to date, and they've only scratched the surface: Each one of the Milky Way's 100 billion or so stars is believed to host more than one planet on average.