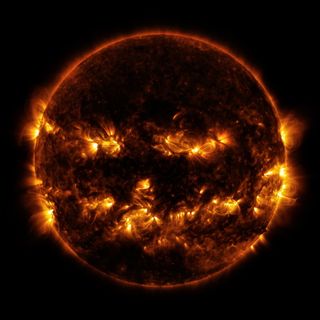 The sun and its spots shine in 335 angstrom extreme ultraviolet light in this image from NASA's Solar Dynamics Observatory Oct. 8, 2014.
(Image: © NASA/SDO)

Boo! An amazing new photo taken by a NASA spacecraft seems to show the sun with creepy jack-o-lantern grin just in time for Halloween.

NASA's Solar Dynamics Observatory (SDO) snapped the composite photo as the spacecraft stared at the sun from its spot in space on Oct. 8, 2014. In the image, hotspots of magnetic fields on the sun have gathered to form what appears to be two "eyes," a nose and a super-spooky grin on the sun's face. There even appear to be ears on the sides of the sun.

The image is a composite of two taken in extreme ultraviolet light. Active regions on the sun, which include magnetic activity in the sun's atmosphere (corona), shine brighter and created the jack-o-lantern-like face.

The sun is at the peak of its 11-year solar cycle, although this one has been a bit more quiet than peaks of the past. The solar peak is associated with huge solar flares and coronal mass ejections (CMEs, bursts of hot plasma sent into the solar system by the sun) that occur as the sun's magnetic fields twist and snap.

The goal of SDO is to monitor the sun's activity to provide better "space weather" forecasts for Earth. Charged particles (associated with solar flares and CMEs) emanating from the sun can spark auroras in the Earth's atmosphere as the particles travel along magnetic fields and excite molecules such as oxygen.

More severe solar events can cause disruptions in satellites and also in power lines, such as a large storm that knocked out much of the power grid in Quebec, Canada in 1989.

SDO launched in 2010 and examines how the sun's magnetic field is created as well as how magnetic energy travels through the solar wind — energetic particles that flow from the sun and through the solar system towards interstellar space.