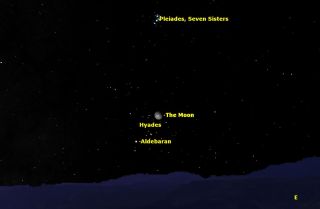 Look eastward around 10 p.m. on Saturday, October 11, to see the waning gibbous moon framed by the Pleiades star cluster above and the bright red giant star Aldebaran below.
(Image: © Starry Night software)

Sometimes some of the prettiest sights for skywatchers require no special equipment, but are best appreciated with our unaided eyes.

This coming Saturday night (Oct. 11) is a case in point. Look eastward around 10 p.m. local time, and you will see the moon rising against a background of distant stars.

The brightest of these stars is Aldebaran, just below and to the left of the moon. Aldebaran is a star in the red giant phase of its evolution, located 67 light-years away in the constellation Taurus. The ancients saw Aldebaran as the glowering red eye of the Bull, Taurus. The light we see from Aldebaran left the star in 1947, just after World War 2 had ended here on Earth.

Behind Aldebaran and the moon, at a distance of 150 light-years, is one of the closest star clusters in our neighborhood of the Milky Way, called the Hyades. The ancients saw the Hyades forming the V-shape of the Bull's snout. Although the individual stars of the Hyades are fairly dim, they combine to make it the brightest star cluster in the sky. Its light left on its journey toward us in the year 1864, at the height of the American Civil War.

Just above the moon is another star cluster called the Pleiades, also known as the Seven Sisters. At 410 light-years away, this cluster is more than twice as distant as the Hyades, but it appears much brighter because it contains young hot stars, and is much more concentrated in volume. The light we see now started toward us in the year 1604, just a few years before Galileo first turned his telescope on the heavens.

By comparison to Aldebaran, the Hyades, and the Pleiades, the moon is extremely close to us — just 237,617 miles (382,408 km) away. Its light — reflected sunlight that left the sun only 8 minutes before — takes slightly over one second to reach us.

If you continue to watch the moon over the rest of the night, you will see the moon appear to move closer to Aldebaran, passing just north of it around 6 a.m. EDT, just as the sky begins to lighten toward dawn.