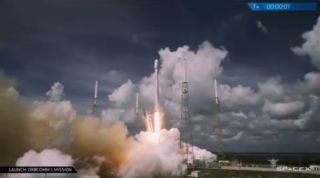 In coming years, the public-private trend in spaceflight is going to flourish, merging the talent and resources of government engineers and scientists with the research skills, vision and entrepreneurship of academia, nonprofits and the private sector. The trend — not just at NASA, but also at the U.S. Department of Defense (DoD) and other federal agencies that rely on advanced technology — is coinciding with ever more sophisticated communication and collaboration tools to solve once-intractable problems.

If the United States is to meet the challenges of long-term, constrained, federal spending while undertaking the bold new goals President Barack Obama has set for the human exploration of deep space, nontraditional partnerships must continue to grow.

While more common now, public-private partnerships are not new. As a contractor to NASA's Johnson Space Center since 1967, the Wyle Science, Technology and Engineering Group has witnessed the changing landscape for human spaceflight missions. Two decades ago, as NASA began to prepare for a permanent human presence in low-Earth orbit aboard the ISS, it became clear the astronauts and their flight surgeons would need a diagnostic tool akin to an X-ray machine. The mission required a noninvasive device to peer beneath the skin, while being portable, compatible with the spaceflight environment, and easily used by an astronaut with no medical training.

By working with medical schools, traditional health care providers, equipment suppliers like General Electric and experts from other agencies, including the DoD, Wyle helped NASA develop an ultrasound technology for that purpose. That public-private partnership led to Earth-based exams for astronauts in space — speeding the development of telemedicine — and advanced protocols for space applications now in use in hospitals across the United States.

More recently, portable ultrasound is now emerging as a critical tool in isolated settings with minimally trained users here on the ground — from disaster response to walk-in clinics to telemedicine. With significantly less training than a certified sonographer, astronauts and terrestrial care providers assess ailments ranging from dental abscesses and broken bones to vision difficulties and cardiopulmonary concerns using the tele-mentoring tools and procedures originally developed in the ISS ultrasound public-private partnership.

Continuing ISS research collaborations are now addressing health challenges that will face astronauts heading into deep space, such as immune system suppression and the blurring of the vision that occurs during extended stays off-planet.

To that end, our team has been integral to efforts taking place at the NASA Human Health and Performance Center (NHHPC), established and directed by Jeffrey Davis, director for Human Health and Performance at NASA Johnson Space Center.  Founded in 2010, the NHHPC is a virtual center that brings organizations together to advance human health and performance innovations for life in space, and on Earth, by sharing best practices and engaging in collaborative projects. The ultrasound probe development continues between GE, Wyle and NASA as part of NHHPC's mission.

To achieve the next phase of NASA's human exploration program, the agency is best served by industry partners with broad engineering, science and operational skills with a keen awareness of how to balance "failure is not an option" with "take risks, be innovative." Collaboration and partnership are key to achieving this balance for mission success.

Author's Note: The NHHPC counts more than 150 global members pledged to a socially responsible atmosphere of collaboration. They have gathered in Houston, Texas, this week for the organization’s fifth annual workshop, "Innovation through Co-development: Engaging Partners."