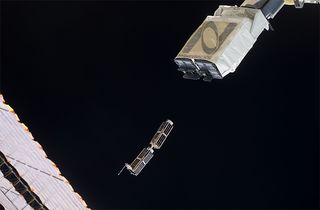 Station commander Steve Swanson was storing some blood samples in one of the station’s freezers Friday morning when he noticed that the doors on NanoRack's cubesat deployer were open, said NASA mission commentator Pat Ryan.

"No crew members or ground controllers saw the deployment. They reviewed all the camera footage and there was no views of it there either," Ryan said.

The satellites, owned by San Francisco-based Planet Labs, are part of a planned 100-member network designed to collect images of the entire Earth every 24 hours.

So far, 12 of 32 CubeSats delivered to the space station aboard a Cygnus cargo ship in July have been deployed, including four launched inadvertently, said NanoRacks spokeswoman Abby Dickes.

Flight control teams are assessing whether to bring the deployer back inside the station or to try to release the remaining CubeSats still awaiting launch.