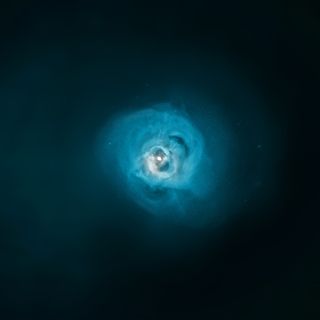 Chandra X-ray Observatory obtained this X-ray image of the hot gas in the central region of the Perseus Cluster of galaxies.
(Image: © Chandra/NASA/ESA )

Through the analysis of light from distant galactic clusters, astronomers have detected a mysterious signal that they’re having a hard time explaining. Although the signal is weak, could it be the much sought-after direct evidence for dark matter?

Dark matter pervades the entire universe and makes up for the bulk of its mass, but what is it? We know it’s out there and oodles of indirect evidence for its presence, but seeing a direct signal has so far proven elusive.

The bulk of dark matter is thought to be composed of non-baryonic matter. As opposed to baryonic matter — matter that we know and love like protons, neutrons and all the quarks in between — non-baryonic matter does not interact with electromagnetic radiation. In other words, we can't directly see it. It does, however, interact gravitationally with normal matter, hence why we can see its gravitational effects on galactic clusters.

But in a newly published study, astronomers analyzing X-ray radiation from distant galactic clusters have spotted a signal, with a specific energy, that doesn’t seem to be associated with any known element or chemical reaction.

Galaxies can become gravitationally bound, creating clusters of galaxies. Our Milky Way, for example, is one member of the aptly-named "Local Group" of galaxies, which also includes the neighboring heavyweight Andromeda. Though the Local Group contains around three dozen other galaxies, as far as galactic clusters go, it's actually quite dinky. Many clusters contain thousands of galaxies that have immense gravitational dominance over their surroundings.

It is therefore believed that these massive gravitational islands "pool" dark matter, causing the clusters to pack on the pounds, making them prime focal points for the search for direct evidence of dark matter.

In these clusters, the space between the galaxies is not empty, it's actually filled with hot gases that have accumulated from billions of years of supernova explosions. These gases generate X-rays that can be readily studied by space-based X-ray telescopes. The elements oxygen, neon, magnesium, silicon, sulfur, argon, calcium, iron, nickel, chromium and manganese have all been identified via their X-ray signals, but Harvard-Smithsonian Center for Astrophysics astronomers have found an X-ray signal detected by the European XMM-Newton space observatory that doesn’t fit in.

Although more work is needed to tease the signal from the background noise, after analysis of 73 clusters, the same signal keeps appearing in observational data. A few of the clusters have also been studied by NASA’s Chandra X-ray observatory, which has also identified the signal at varying strengths. One explanation could be that they have detected the specific X-ray emission from the decay of the hypothesized "sterile neutrino" — a type of non-baryonic particle that could be a significant dark matter candidate.

NEWS: Dark Matter Mystery Could Be Solved in 10 Years

The researchers urge caution over the detection of this X-ray signal — that is centered around an energy of 3.56 keV — however. Although the signal has been detected across a large sample of clusters and it appears to be real, its statistical significance is well below the threshold that can be considered to be a "discovery." Better resolution of this emission line is required, something that may be attainable with the launch of the Japanese Astro-H X-ray observatory in 2015.

The jury may still be out as to whether this mystery X-ray signal is indeed caused by the decay process of sterile neutrinos, but it’s exciting to think that we may be on the verge of finally uncovering a direct dark matter signal at last.