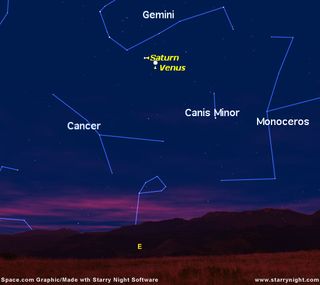 Evening sky watchers might be asking themselves, "Where did all the planets go?" With Jupiter having disappeared into the bright evening twilight during this past week, the evening sky is now totally devoid of any bright planets.

Morning is the time to find planets.

Venus and Saturn are easily visible and will be putting on a predawn show during this upcoming week in the eastern sky, gradually appearing to close in on each other until Aug. 31 when they'll be in conjunction, just under 2 degrees apart in our sky To visualize this, consider that the apparent width of the Full Moon is equal to ? degree and that the width of your fist held at arm's length is roughly equal to 10 degrees.

The two planets will pull away from each other during September.

It is easy to tell the two planets apart in the sky. Venus is by far the brightest. The only stars in the eastern sky that compete with Saturn for brightness are much farther away from Venus, off to the right.

Venus rises around 3-a.m. local daylight time (or some two hours before the first light of dawn) and as noted above, starts the month near the much-dimmer Saturn. This is the peak of Venus's highest morning apparition (for skywatchers at mid-northern latitudes).

Shining at magnitude -4.2, Venus glides about 3? degrees south of the center of M44, the pretty Beehive star cluster in Cancer, on the mornings of Sept. 10 and 11. Binoculars will provide the best views. Also on the morning of the 10th, take note of the waning crescent Moon, well above and to the left of Venus.

By month's end Venus has descended to within 5 degrees of Regulus, the brightest star in Leo, the Lion. Venus will pass close to Regulus on Oct. 3.

Saturn starts September paired-off with brilliant Venus. Well above and to the left of this planetary pair are the "twin stars" of Gemini, Pollux and Castor, both dimmer than Saturn.

Saturn is shining at a very respectable magnitude of +0.2, but this pales to the brilliance of Venus. (On this scale, smaller numbers indicate brighter objects.) Indeed, Saturn only appears 1/58 as bright! Venus gradually pulls away to the east as September progresses, leaving Saturn on its own.

The crescent Moon will pass through this part of the sky on the mornings of the Sept. 9 and 10 and will form a broad triangle with Saturn and Pollux on both mornings.

Currently located in the constellation of Gemini, Saturn's famous ring system is tipped about 22 degrees toward Earth and still provides a spectacular view even in small telescopes.

Made up by billions of ice and rock particles of all sizes -- from small debris to boulders as big as houses -- these rings orbit Saturn at varying speeds. There are hundreds of these rings, believed to be pieces of shattered comets, asteroids or moons that broke apart before they reached the planet. The rings are so big that they would fill most of the distance between Earth and the Moon.

Along with Jupiter, Mars and Mercury are also currently hidden in the solar glare. Both Jupiter and Mars will be in conjunction with the Sun during September and will be effectively out of sight for a number of weeks to come.

Mercury passed through inferior conjunction on Aug. 23 and will start becoming evident in the morning sky in about another week. Uranus, Neptune and Pluto are not visible to the unaided eye.

It will not be until the second week of October that a bright planet (Saturn) rises into view before the stroke of midnight.