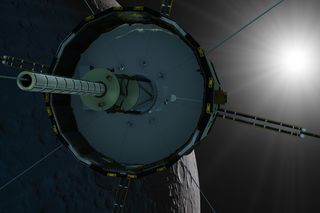 An artist's depiction of NASA's International Sun-Earth Explorer 3 spacecraft as it flies by the moon on Aug. 10, 2014. The volunteer ISEE-3 Reboot Project hopes to use the 36-year-old probe for new interplanetary science.
(Image: © Mark Maxwell/ISEE-3 Reboot Project)

A private team is priming a 36-year-old NASA spacecraft to perform new science as it travels through interplanetary space after attempts to move the probe into a position closer to Earth failed.

The volunteer team initially hoped to park the vintage International Sun-Earth Explorer 3 spacecraft, called ISEE-3 for short, in a stable location between the Earth and the sun called L-1. But those attempts ended when controllers discovered there wasn't enough nitrogen pressurant left in the probe's tanks to help make course corrections.

"We're disappointed we couldn't put it in the L-1 orbit, but we had a lot of scientists saying we're more interested in interplanetary space," Keith Cowing, co-leader of the ISEE-3 Reboot Project, told Space.com.

That's because at least five of the 13 instruments on the ISEE-3 spacecraft are still working, even after more than three decades in space. They could allow scientists to do things such as listen for gamma-ray bursts, which are the brightest explosions in the universe and often take place over just a few minutes.

Pinpointing the source of gamma-ray bursts requires a coordinated effort among several observatories, so having one more probe in space "listening" will be valuable, Cowing said.

Getting data quickly, however, will in part depend on the number of radio antennas on Earth listening to the signal from ISEE-3. Cowing said there is good coverage in the United States in Europe, but coverage is missing in two-thirds of the globe, in areas such as Africa, Australia and Japan.

The ISEE-3 Reboot Project plans to turn to crowdsourcing to ask for citizen scientists to set up radio dishes to listen in. The information ISEE-3 yields will be open source and perhaps the first such global citizen radio science project, Cowing said. After all, it was crowdfunding on the website RocketHub that allowed the group to raise $160,000 for its initial attempts to salvage the abandoned ISEE-3 spacecraft in the first place.

NASA's ISEE-3 spacecraft originally launched in 1978 to study interactions between the Earth's magnetic field and the solar wind, then had its mandate changed to see how the wind influences comet atmospheres. It flew through Comet Giacobini-Zinner in 1985 and also gathered data on Halley's Comet in 1986 before being put into hibernation in 1998.

Cowing pledged the data will be "semi-live," depending on how much processing it will take for the data to be useable after being picked up by the dish. Already, the spacecraft's magnetometer has picked up disturbances in space that can be linked back to solar activity.

The science campaign is slated to begin Aug. 10, when ISEE-3 swings by the moon, and will continue for as much of its orbit as can be heard from Earth. ISEE-3 will travel in a 300-day orbit around the sun, but the final coordinates are still being determined.

Cowing added that the group will publicize the results of the science with external entities, and those partnerships will be announced shortly.

As for the $160,000 raised through RocketHub, Cowing said it's just about gone. The money went to renting time on NASA's Deep Space Network of dishes, flying four people to the giant Arecibo Observatory in Puerto Rico for a week to set up communications, and other miscellaneous costs.

There are perhaps a couple of more transmission sessions set up to talk with ISEE-3 to configure it for science, then the group will switch to more listening to keep costs lower. The group has authorization from NASA under a Space Act Agreement to do communications, which Cowing expects will be kept open as need arises.

But it's the citizen science that will be the focus from now, which Cowing said will allow others to have more "hands-on" participation in space exploration. "That potential is actually the most important thing to result from this," he said, adding he expects to operate the spacecraft for at least five to 10 years if all of its systems stay healthy.