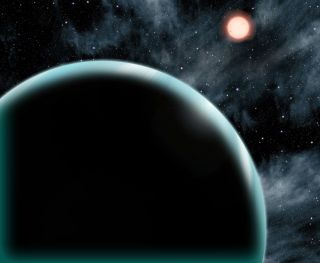 A newfound alien planet is one for the record books.

The alien planet Kepler-421b — which crosses the face of, or transits, its host star from Earth's perspective — takes 704 Earth days to complete one orbit, and thus has the longest year known for any transiting alien world, researchers said. (For comparison, Earth orbits the sun once every 365 days, and Mars completes a lap every 780 days.)

"Finding Kepler-421b was a stroke of luck," study lead author David Kipping, of the Harvard-Smithsonian Center for Astrophysics in Cambridge, Massachusetts, said in a statement. "The farther a planet is from its star, the less likely it is to transit the star from Earth's point of view. It has to line up just right." [10 Exoplanets That Could Host Alien Life]

To be clear, Kepler-421b does not have the longest year of any known alien planet. Many nontransiting worlds have much more far-flung orbits, including the gas giant GU Piscium b, which takes about 160,000 years to complete a lap around its host star.

Kepler-421b, which is about the size of Uranus, is located about 1,000 light-years from Earth, in the constellation Lyra. It was spotted by NASA's Kepler space telescope, which launched in March 2009 to hunt for transiting exoplanets by noting the tiny brightness dips caused when they cross in front of their stars.

Kepler has found nearly 1,000 alien worlds to date and has flagged more than 3,000 other "candidates" that still need to be confirmed by follow-up observations or study. Mission team members expect that at least 90 percent of these candidates will eventually turn out to be bona fide planets.

The spacecraft suffered a glitch in May 2013 that ended its original mission, but NASA recently signed off on a new mission, called K2, that will keep Kepler hunting for exoplanets, in addition to other cosmic bodies and phenomena.

Most of Kepler's finds thus far are worlds that orbit relatively close to their parent stars, since such planets transit relatively frequently. The instrument has generally required three transits to conclusively identify an exoplanet, but Kepler-421b was detected after it crossed its host star's face just twice, researchers said.

Kepler-421b circles its parent star, which is cooler and dimmer than Earth's sun, at an average distance of 100 million miles (160 million kilometers), researchers said. This places the exoplanet beyond its solar system's "snow line" — the boundary between rocky and gaseous planets. (Beyond the snow line, ice grains glom together to form gas giants, such as Jupiter and Saturn.)

Gaseous planets often don't remain beyond the snow line, however. Astronomers have discovered many "hot Jupiters" — giant worlds that have migrated inward significantly over time and now complete an orbit in just a few days (or, in some cases, a matter of hours).

"This is the first example of a potentially nonmigrating gas giant in a transiting system that we've found," he said.