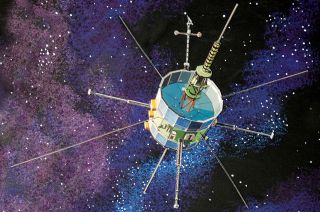 The quest to rescue a 36-year-old NASA spacecraft will go on for at least another day, as a private group controlling the probe achieved only partial success with an engine firing Tuesday (July 8).

The private team operating NASA's International Sun-Earth Explorer 3 spacecraft (ISEE-3) aimed to fire its engine numerous times to change the probe's trajectory and put it in a more stable position for communicating with Earth. But things did not go exactly as planned.

"The first segment was full duration but only partially successful," Keith Cowing, co-leader of the ISEE-3 Reboot Project, wrote in a blog post Wednesday (July 9). "The second and third attempts failed. Possible causes (under investigation) include valve malfunction and fuel supply issues."

Controllers in California, who are beaming commands to ISEE-3 via the Arecibo Observatory in Puerto Rico, tried the burns several times. After resetting the spacecraft and sending more commands, they stopped work for the day when their "window" of communication closed.

They noted that ISEE-3's thruster valve was opening and closing as expected, but the spacecraft wasn't accelerating.

"Either we are low on fuel in System A, or latch valve A is not working," the group said via Twitter, adding that the sun guidance sensor and accelerometers were not showing thrust.

"The ISEE-3 team is working [on] a strategy for tomorrow's pass. More to follow," the team concluded late Tuesday night.

The private group took control of the spacecraft several weeks ago after raising more than $150,000 via crowdfunding and obtaining permission from NASA, which retired the spacecraft in 1997. ISEE-3 launched in 1978 and worked as a comet chaser and sun probe, among other roles.

The team has not yet determined what to do next with ISEE-3 next, focusing first on making sure the spacecraft can consistently communicate with Earth. The clock is ticking for the Reboot Project to change ISEE-3's trajectory; Cowing has said that fuel consumption will become an issue by late July.