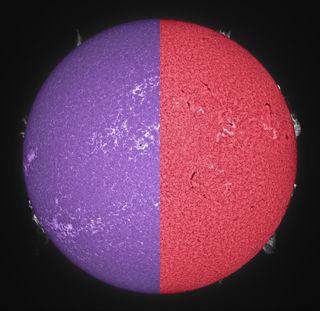 What astronomers thought were a pair of potentially life-friendly alien worlds are illusions, apparitions conjured up by a star's intense magnetic activity, a new study suggests.

These new findings could one day not only help astronomers dispel more such illusory exoplanets, but discover worlds that would otherwise remain hidden, scientists added. A new video about the possible cosmic illusions also details the finding.

Astronomers have confirmed the existence of more than 1,700 planets beyond the solar system in the past 20 years, and may soon prove the existence of thousands more such exoplanets. Of special interest are exoplanets in habitable, or Goldilocks, zones, the regions around stars just warm enough to possess liquid water on their surfaces, as there is life virtually wherever liquid water is found on Earth. [10 Exoplanets That Could Host Alien Life]

One star that sparked great interest recently was Gliese 581, also known as GJ 581, which scientists thought may have possessed as many as six planets, including Gliese 581g, which its discoverers suggested was the first known potentially habitable alien world. However, Gliese 581g has since attracted much controversy over whether it exists or not.

The existence of exoplanets Gliese 581e, 581b and 581c is well-established. However, the existence of the other three potential worlds — 581d, 581f, and 581g — has been hotly debated. Tantalizingly, both Gliese 581d and 581g appeared to lay within their star's habitable zone.

One way astronomers detect exoplanets is the radial velocity method, which looks for repeated shifts in a star's light that are signs of a planet's gravitational pull yanking the star back and forth. However, radial velocity effects attributed to planets are sometimes actually just due to dark spots on the star itself, as was the case with Gliese 581f, which scientists no longer believe exists.

To help resolve the debate over whether potentially habitable worlds Gliese 581d and 581g are real, astronomers investigated their host star's activity. Gliese 581, located about 20 light-years from Earth in the constellation Libra, is a red dwarf, a cool dim star about one-third the mass of the sun.

The scientists now find these controversial worlds are apparently illusions created by a noisy star.

"We've proven that some of the controversial signals from Gliese 581 don't come from two proposed Goldilocks planets, but instead are coming from activity within the star itself masquerading as planets," lead study author Paul Robertson, an astronomer at Pennsylvania State University in University Park, told Space.com.

The researchers analyzed light from Gliese 581 using two different spectrographs — the European Southern Observatory's HARPS instrument, on a telescope in Chile, and the HIRES spectrograph, which is on Hawaii's Keck telescope. They focused on patterns of light emitted by super-hot hydrogen and sodium atoms within the star, which are very sensitive to changes in magnetic activity.

A star's magnetic activity can alter the rate at which part of the star's atmosphere spins, creating a signal that can be mistaken for a planet. After correcting for these misleading clues, the astronomers found the signals attributed to Gliese 581d and 581g were actually created by regions of intense stellar magnetic activity, like sunspots on the sun. Meanwhile, with the same methods, they confirm that planets Gliese 581e, 581b and 581c are real.

"This result is exciting because it explains, for the first time, all the previous and somewhat conflicting observations of the intriguing dwarf star Gliese 581," Robertson said in a statement.

This work "should not be seen as an indictment of previous studies of Gliese 581," Robertson added. "The magnetic effects we observe are very subtle, and other astronomers were not negligent in claiming the detection of new planets."

The exact nature of the magnetic activity creating the false signals of Gliese 581d and 581g is still mysterious.

"These features behave like starspots, but previous research suggests the star's brightness does not vary as much as we would expect if large spots are present," Robertson said. "Additional research is required to fully understand the magnetic activity of this star."

Analyzing the magnetic activity of stars could rule out other potential exoplanets, Robertson said. However, it could also help find exoplanets that might otherwise have escaped notice within a star's noise, he added.

"My prediction is we would find more new planets than we would lose," Robertson said. "Stellar noise can be removed to reveal exciting new exoplanets."